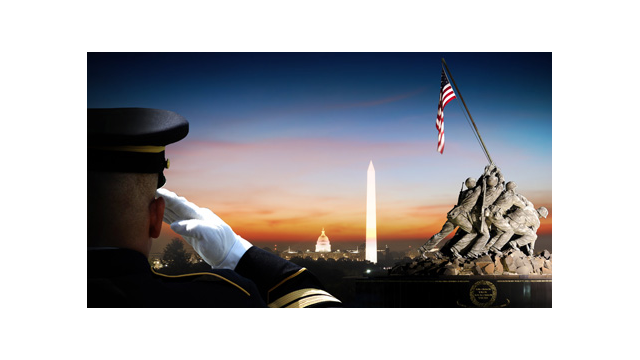 ARLINGTON, VA; October 2, 2012 – PBS and Capital Concerts announced today the broadcast of the NATIONAL SALUTE TO VETERANS, airing on PBS Sunday, November 11, 2012, at 8:00 p.m. ET, in honor of the service and sacrifice of our 22 million American veterans. Hosted by acclaimed actors Joe Mantegna (“Criminal Minds”) and Gary Sinise (“CSI: New York”), the national television event celebrates the American heroes who have served throughout our country’s history. The program will also be broadcast to our troops serving around the world on the American Forces Network.

The one-hour program is produced by Capital Concerts, the nation’s leading producer of live holiday specials and the production force behind A CAPITOL FOURTH and the NATIONAL MEMORIAL DAY CONCERT. These two celebrations of America’s most important holidays have become annual traditions, and are consistently among the top ten rated shows on PBS from year-to-year.
The NATIONAL SALUTE TO VETERANS will feature new footage shot with co-hosts Mantegna and Sinise, as well as a selection of “best of the best” moments from past NATIONAL MEMORIAL DAY CONCERTS. The all-star line-up includes distinguished American leader General Colin L. Powell USA (Ret.); Academy Award, Golden Globe and Emmy Award-winning actor Forest Whitaker; “American Idol” finalist Pia Toscano; singer-songwriter Javier Colon (winner of “The Voice”); “American Idol” winner Kris Allen; acclaimed actors A.J. Cook and Jason Ritter; and gospel legend Yolanda Adams, accompanied by the National Symphony Orchestra, conducted by maestro Jack Everly.  “PBS is honored to have the opportunity to salute America’s 22 million veterans,” said PBS senior vice president & chief TV programming executive John F. Wilson. “This program will bring together distinguished American leaders, artists and performers in celebration of those who have served and sacrificed so much for their country.”
“Our military members have a long and proud tradition of service and sacrifice,” said Capital Concerts executive producer Jerry Colbert. “We are honored to present this new broadcast in profound gratitude to our veterans and their families, and in promise to them that their dedication to our country will never be forgotten.”
Featured segments in the NATIONAL SALUTE TO VETERANS will include:
•    A special thank you to our troops who have been serving in Iraq and Afghanistan by General Colin Powell;   •    A heartfelt tribute to our wounded warriors for their bravery and service to country;
•    A look at how veterans and their families are coping with the enduring, and often invisible, wounds of war; and
•    The touching story of the healing friendship between a young woman and a Vietnam veteran who served with her father.
The broadcast will be supported by a powerful social media component and resource-rich website designed to support veterans of all ages and their families. Highlights will include a “Wall of Honor,” where personal tributes to a loved one can be posted, as well as an online forum for veterans to share their stories.
The program is a co-production of Jerry Colbert of Capital Concerts and WETA, Washington, D.C.  For the National Salute to Veterans, executive producers Jerry Colbert and Michael Colbert have assembled an award-winning production team that features the top Hollywood talent behind some of television’s most prestigious entertainment awards shows.  The team includes: Emmy award-winning producer Walter C. Miller, whose credits include the GRAMMY AWARDS and COUNTRY MUSIC AWARDS; award-winning director Paul Miller whose credits include THE COUNTRY MUSIC AWARDS and SATURDAY NIGHT LIVE; and veteran television writer Joan Meyerson.    Funding is provided by the Lockheed Martin Corporation, the National Park Service, the Department of the Army, PBS and public television stations nationwide.
About PBS PBS, with its nearly  360 member stations,   offers all Americans the opportunity to explore  new ideas and new  worlds  through television and online content. Each  month, PBS reaches  nearly  123 million people through television and  more than 21 million  people  online, inviting them to experience the  worlds of science,  history,  nature and public affairs; to hear diverse  viewpoints; and to  take front  row seats to world-class drama and  performances. PBS’ broad  array of  programs has been consistently  honored by the industry’s most  coveted  award competitions. Teachers of  children from pre-K through  12th grade  turn to PBS for digital  content and services that help bring  classroom  lessons to life. PBS’  premier children’s TV programming and  its  website, pbskids.org,     are parents’ and teachers’ most trusted partners in inspiring and   nurturing curiosity and love of learning in children. More information    about PBS is available at www.pbs.org, one of the leading dot-org websites on the Internet, or by following PBS on Twitter, Facebook or through our apps for mobile devices. Specific program information and updates for press are available at pbs.org/pressroom or by following PBS Pressroom on Twitter. About Capital Concerts Capital Concerts is the production force behind two of television’s longest-running and highest-rated live programs commemorating America’s most important holidays. The NATIONAL MEMORIAL DAY CONCERT, the nation’s tribute to our men and women in uniform, and A CAPITOL FOURTH, our country’s biggest birthday party, have become American traditions that have consistently ranked among the highest-rated programs on PBS over the past decade. Both holiday specials have been honored with over 70 awards, including the New York Film Festival Award, the Telly Award, the Golden Cine Award, the Videographer Award, the National Education Association Award, the Aurora Award, the Christopher Award, the Communicator’s Award, the AXIEM Award, the Omni Award and the Writers Guild of America Award.