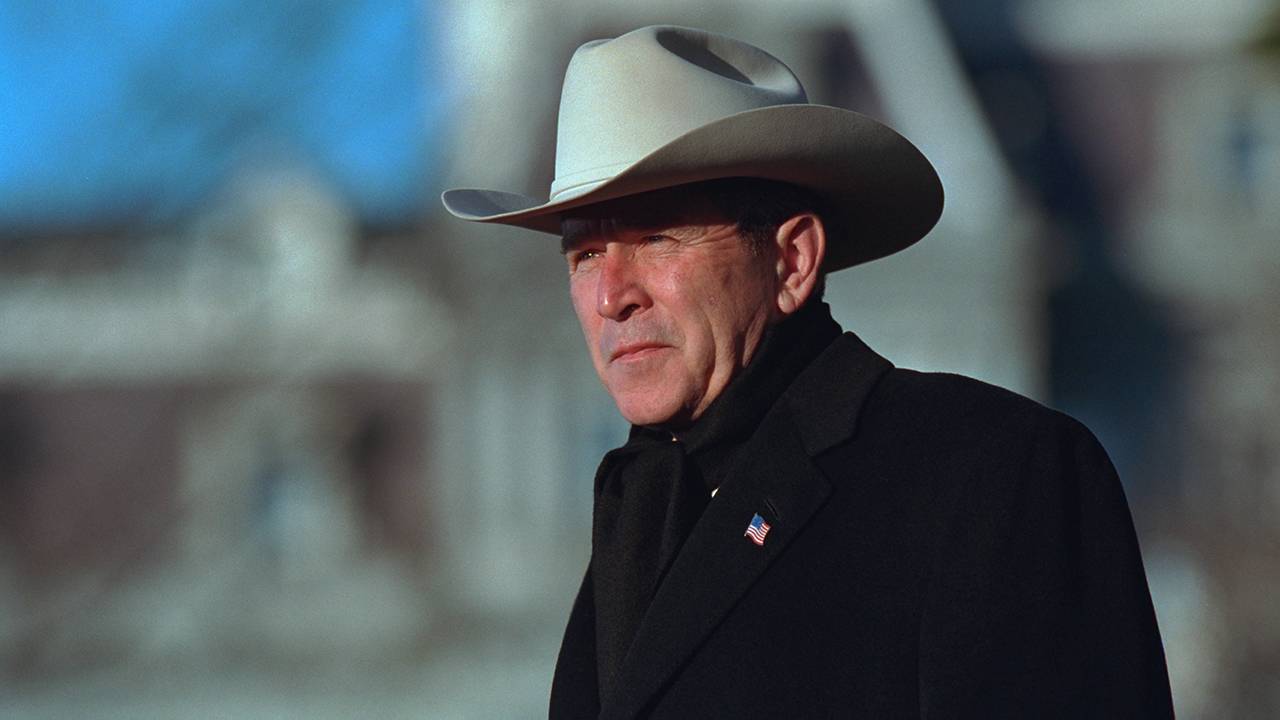 New Two-Part Documentary About the Life and Presidency
of George W. Bush to Premiere Spring 2020

BEVERLY HILLS, CA;  JULY 29, 2019 — Today at the Television Critics Association Press Tour, PBS and American Experience announced “W,” a two-part biography on the life and presidency of George W. Bush. The newest production in the American Experience Peabody Award-winning collection The Presidents, “W” features interviews with historians, journalists and several members of the president’s inner circle, including chiefs of staff Andy Card and Josh Bolten, speechwriter David Frum, press secretary Ari Fleischer and others. Written, directed and produced by Barak Goodman and executive produced by Mark Samels, the film will premiere in the spring of 2020 on PBS. Goodman previously directed the highly-acclaimed Clinton, also part of The Presidents collection, and is the writer, producer and director of American Experience “Woodstock: Three Days that Defined a Generation,” premiering August 6, 2019 on PBS.

“As America’s home for documentaries, PBS and American Experience continue to present a robust collection of critically acclaimed presidential biographies from Eisenhower to Clinton,” said Perry Simon, Chief Programming Executive and General Manager of General Audience Programming, PBS. “‘W’ adds a compelling new perspective on the life and times of George W. Bush, with in-depth interviews and key insights into this important time in our nation’s history.”

“George W. Bush took office less than ten months before 9/11 ushered in a new era of fear, anger and uncertainty, as news of threat levels and anthrax scares became a daily occurrence,” said Susan Bellows, American Experience senior producer. “Twenty years after the dramatic Bush-Gore election of 2000 that introduced the term ‘hanging chad’ to our lexicon, this new film explores the evolution of George W. Bush’s character and how it shaped his presidency.”

“What makes George W. Bush such a fascinating subject is that he was one of the least prepared presidents in our history, yet faced some of the greatest challenges,” said filmmaker Barak Goodman. “Not since Lincoln has such an inexperienced leader been called upon in a moment of genuine existential crisis. How Bush evolved in office under these pressures  — at first struggling mightily, but later finding his feet — illuminates not only his character, but the evolving nature of power and the presidency in an increasingly dangerous world.”

Part One of “W” will follow Bush’s unorthodox road to the presidency through the contested election of 2000, when 36 days passed without a clear president-elect. Finally, a Supreme Court ruling in favor of Bush resulted in his becoming the 43rd President of the United States. But the new administration’s focus on domestic issues was abruptly brought to a halt by the terrorist attacks of September 11, 2001. Part Two begins with the president’s response to 9/11 and the war in Iraq, and continues through Bush’s second term, marked by the devastating impact of Hurricane Katrina and an unpopular intervention in the most serious financial crisis since the Great Depression.

Barak Goodman (Writer, Producer, Director) has become one of the most prolific and respected nonfiction filmmakers in America. A co-founder of Ark Media, his films have been nominated for an Academy Award and won multiple Emmy and Writers Guild Awards, duPont-Columbia and Peabody Awards, the RFK Journalism Prize, and three times been official selections at the Sundance Film Festival. Among his 12  films for American Experience are Oklahoma City, about the worst domestic terrorist attack in American history and its roots in the rise of the radical right; My Lai, the Emmy and Peabody Award-winning film on America’s worst war crime; Scottsboro, the Academy Award-nominated film on the trial of black teenagers falsely accused of rape in Depression-era Alabama; Clinton, a four-hour biography of the 42nd president; and Woodstock: Three Days that Defined a Generation. Goodman was also the director, writer and producer of the six-hour PBS series Cancer: The Emperor of all Maladies, based on the Pulitzer Prize-winning book by Siddhartha Mukherjee. He wrote and directed Makers, the first complete history of the modern women's movement, and directed six films for the PBS series FRONTLINE, including the Peabody Award-winning Lost Children of Rockdale County and the duPont-Columbia-winning series Failure to Protect. He recently completed Slay the Dragon with Participant  Media, a film about gerrymandering and voter suppression that premiered at the 2019 Tribeca Film Festival.

Mark Samels (Executive Producer) conceives, commissions and oversees all films for the PBS flagship history series American Experience. Samels has overseen more than 130 films, expanding both the breadth of subjects and the filmmaking style embraced by the series, allowing for more contemporary topics and witness-driven storytelling. Beginning his career as an independent documentary filmmaker, he held production executive positions at public television stations in West Virginia and Pennsylvania before joining WGBH. Samels is a founding member of the International Documentary Association and has served as a governor of the Academy of Television Arts & Sciences. A graduate of the University of Wisconsin, Samels holds honorary Doctor of Humane Letters degrees from Emerson College and Elizabethtown College.

Susan Bellows (Senior Producer, American Experience) is an award-winning producer and writer with more than 20 years of experience producing national programs for public television. Bellows most recently served as the writer, director and producer for The Bombing of Wall Street, which premiered on American Experience in February 2018. She was also the producer and director on the four-hour JFK, which premiered in 2013. Since joining the series in 2003, she has provided editorial support and guidance to its broadcast and new media work. Previously, Bellows served as senior producer for the Peabody and Emmy-Award winning series Africans in America. Her other producing credits include films for The Great Depression, for which she received an Emmy nomination, and America’s War on Poverty, both productions of Blackside, Inc. Bellows also co-produced New Worlds, New Forms for the WNET-produced series Dancing, an eight-hour landmark series on dance forms around the world.

About American Experience
For 30 years, American Experience has been television’s most-watched history series. Hailed as “peerless” (The Wall Street Journal), “the most consistently enriching program on television” (Chicago Tribune) and “a beacon of intelligence and purpose” (Houston Chronicle), the series brings to life the incredible characters and epic stories that have shaped America’s past and present. American Experience documentaries have been honored with every major broadcast award, including 30 Emmy Awards, four duPont-Columbia Awards and 17 George Foster Peabody Awards; the series received an Academy Award nomination for Best Documentary Feature in 2015 for Last Days in Vietnam. American Experience also creates original digital content that uses new forms of storytelling to connect our collective past with the present. Visit pbs.org/americanexperience and follow us on Facebook, Twitter, Instagram and YouTube to learn more.