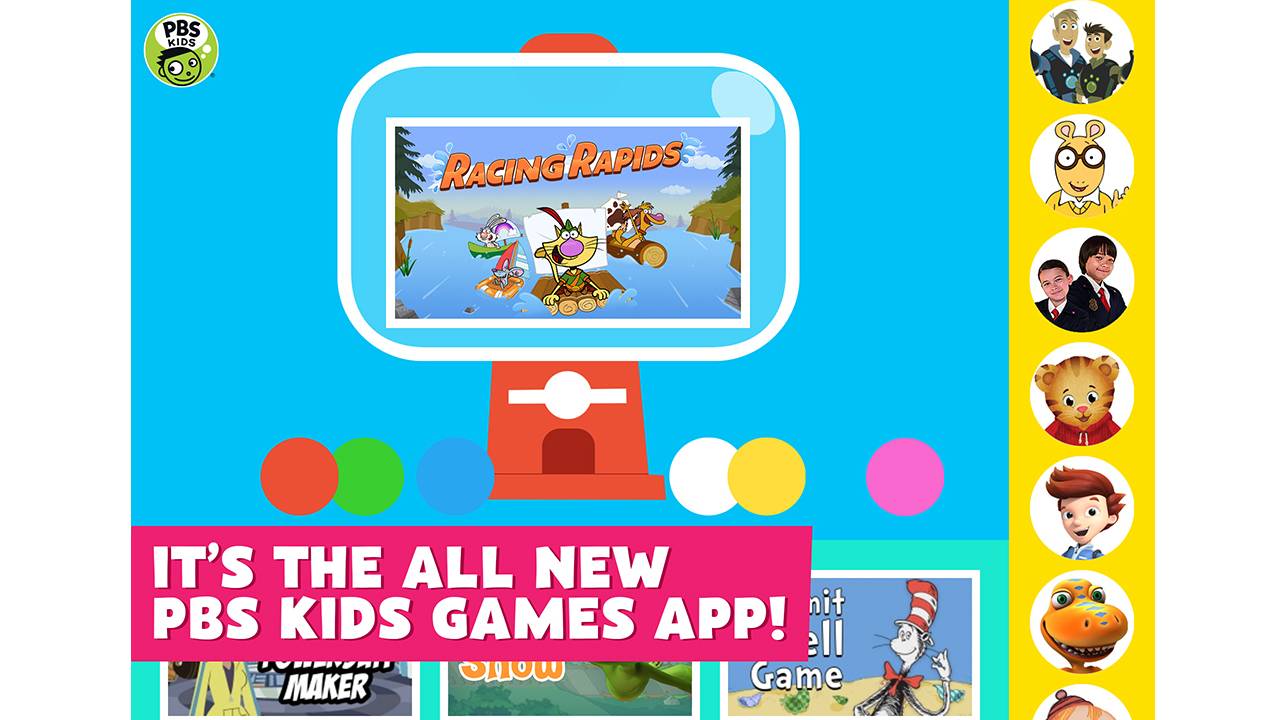 Arlington, VA, April 28, 2016 – Today, PBS KIDS is making its popular digital learning experiences even more accessible to America’s children with the launch of the PBS KIDS Games App, offering a wide library of games in a single, free mobile experience. Available now on iPhone, iPad, iPod touch and Android, PBS KIDS Games will ensure that as many families as possible can play free learning games, anytime and anywhere. The app includes games from popular PBS KIDS series such as WILD KRATTS and DANIEL TIGER’S NEIGHBORHOOD. New games will be added regularly, encouraging children to explore math, science, creativity and more through gameplay with their favorite characters.

Designed for kids ages 2-8, the app was built on years of PBS KIDS research about the ways children use and learn from media. Recent studies have analyzed and found positive effects on early learning from PBS KIDS’ interactive games, television and hands-on activities from series such as PEG + CAT and THE CAT IN THE HAT KNOWS A LOT ABOUT THAT!. In addition to increases in children’s achievement in important skill areas, research has shown that PBS KIDS resources increase parent engagement in kids’ learning.

“We know that kids can learn through engaging gameplay,” said Sara DeWitt, Vice President, PBS KIDS Digital. “PBS KIDS is a trusted digital resource for families; both kids and parents have asked for an app that offers their favorite PBS KIDS games in one place. The PBS KIDS Games App was developed as a direct response to the needs of today’s families, and is designed to deliver the experience that kids want, while helping them learn important skills along the way.”

The PBS KIDS Games App builds on PBS KIDS’ success in the digital space. PBS KIDS offers more than 40 apps to support children’s learning and provide parent tools, including the popular and free PBS KIDS Video App, which includes thousands of videos, has been downloaded more than 13 million times and averages 336 million video streams per month*. The PBS KIDS Games App is a powerful complement to the Video App, offering the largest collection of PBS KIDS games to date in one free mobile experience and extending more learning opportunities to the millions of families who rely on PBS KIDS.

-- A kid-friendly user experience, making it easy for children to browse and play games anytime and anywhere

-- Parent resources, including information on each TV series, local PBS station schedules and the ability to manage the amount of storage the app uses on each device

The PBS KIDS Games App is now available for free on iPhone, iPad and iPod touch, as well as Android mobile and tablet devices in the Google Play store, and is coming soon to Amazon Fire tablets in the Amazon Appstore.