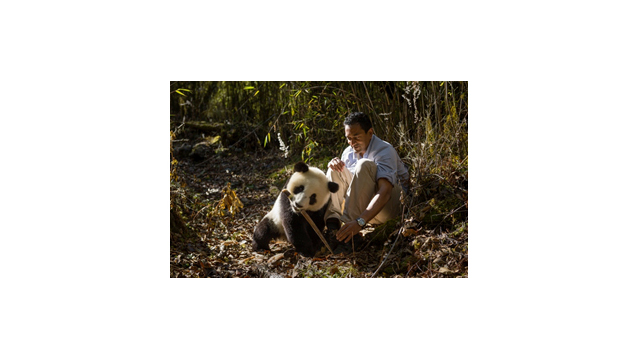 Updated November 16, 2014 (previously issued on 1-20-14) --PBS announced today the broadcat schedule of an ambitious new five-part series that shows nature as we almost never see it on television. EARTH A New Wild takes a fresh look at humankind’s relationship to the planet’s wildest places and most fascinating species. The series will premiere Wednesday, February 4 on PBS with back-to-back episode—“Home,” followed by “Plains,”—beginning at 9:00 pm ET. The following episodes, listed below, will air each subsequent Wednesday through February 25 at 10:00 pm ET. (check local listings).

Produced by National Geographic Television in association with Passion Planet, the series is hosted by Dr. M. Sanjayan, leading conservation scientist, who takes viewers on a stunning visual journey to explore how humans are inextricably woven into every aspect of the planet’s natural systems. With 45 shoots to 29 different countries, the series features spectacular natural history footage from the most striking places on Earth, filming encounters between wild animals and the people who live and work with them. With up-close looks at a range of species, from giant pandas to humpback whales and African lions to Arctic reindeer, Sanjayan reveals that co-habitations with animals can work — and be mutually beneficial.

"Earth has entered a new epoch and we are now living on a planet where our impacts are felt everywhere" says Sanjayan an expert in conservation and wildlife ecology who has worked with The Nature Conservancy on significant conservation efforts across the globe. "This series is a first for nature films; it turns the camera around and acknowledges that spectacular nature doesn’t exist in isolation, that humans are part of the picture. In this way, we show viewers not only stunning, never before seen natural history but also discover extraordinary stories that challenge the very notion that humans are separate from nature, and how, in the new wild – humans and wildlife can – and must--- thrive together".

Episodes of EARTH A New Wild include:


EARTH A New Wild uses advanced filming techniques to provide visuals as stunning as the best natural history programs. Distinguishing itself from nearly all other nature films, however, the series turns the cameras around, showing the world as it really is —with humans in the picture.

“PBS viewers love programs that explore our planet in new and intriguing ways, and EARTH A New Wild takes this idea to an exciting new level,” says PBS chief programming executive and general manager Beth Hoppe. “This series is an amazing view of us and our natural surroundings as never seen before.”

In collaboration with PBS, The Nature Conservancy will be an engagement and outreach partner for the series, extending the reach and impact of EARTH A New Wild. The Conservancy will create a digital companion site to the series, which will offer web content with online community and interactivity integrated throughout. The goal of the site is to build and engage an audience around the series content with additional content and online features during the episodes’ live dates, which will continue after the run of the series.

About Dr. M. Sanjayan
M. Sanjayan is a leading ecologist, speaker, writer and an Emmy-nominated news contributor focused on the role of conservation in improving human well-being, wildlife and the environment. He holds a doctorate from the University of California, Santa Cruz, and a research faculty appointment with the Wildlife Program at the University of Montana. His scientific research has been published in journals including Science, Nature and Conservation Biology. Sanjayan’s broad-reaching television experience includes serving as a science and environment contributor to CBS News. He is also the science correspondent for Years of Living Dangerously (Showtime) and has served as a host for numerous documentaries for BBC and Discovery Channel. He regularly posts about his research expeditions on twitter at @msanjayan.

PBS Companion Website and Education Outreach
EARTH A New Wild presents great opportunities for further exploration of the stories it covers. In collaboration with Passion Pictures, PBS will create a companion website that allows viewers to dig deeper into concepts and topics from the show, and explore fascinating stories not seen in the films. Visitors can view supplementary videos, examine extraordinary photographs and explore map-based interactive content. Streaming of each episode will be available on the website after its broadcast.

Also in collaboration with Passion Planet, PBS Learning Media will create educational videos and interactive components for teachers and students, drawing on the wealth of content from the series and addressing elements of environmental science and biology curricula. The videos will cover ecology and conservation issues including ecosystem rehabilitation, land and water management, animal diversity and more. In interactive modules, students will be challenged to create solutions to environmental problems and simulate the consequences of their ideas. Additional activities will extend the reach of the broadcast and online content for teachers and students.

Executive producer is David Allen of Passion Pictures. Funding for EARTH A New Wild is provided by a generous grant from the Anne Ray Charitable Trust.

About National Geographic Television
National Geographic Television is the production arm of the National Geographic Society, one of the world’s largest scientific and educational organizations. For 50 years, NGT has been producing groundbreaking documentary films, pushing filmmaking technology to its limits, bringing great stories to television audiences worldwide. NGT is the winner of 147 Emmy Awards and nearly 1,000 other industry accolades, including recognition from the Peabody Awards, duPont-Columbia Awards and top honors from natural history film festivals around the world. Brooke Runnette is president of NGT.

About Passion Planet
Led by multiple award-winning producer David Allen, Passion Planet is the landmark television department of Passion Pictures, whose Academy Award-winning feature documentaries, including One Day in September and Searching for Sugar Man, make it one of the leading documentary companies in the world. EARTH A New Wild is the culmination of a long history for Allen, who has worked with PBS and its series NATURE on films including “Deep Jungle,” “Gorilla King,” “Elephants of Timbuktu” and the enormously successful  “My Life as a Turkey,” which won Allen his fourth Emmy Award and Wildscreen Festival’s coveted Golden Panda Award. Passion Planet is currently producing a follow up to  “Turkey,” a shark-based film for Discovery and a docudrama feature for CBC and Film Four entitled “Hadwin’s Judgement.” More information about Passion is available here.

Interviews with producers are available. For images and additional up-to-date information on this and other PBS programs, visit PBS PressRoom at pbs.org/pressroom.