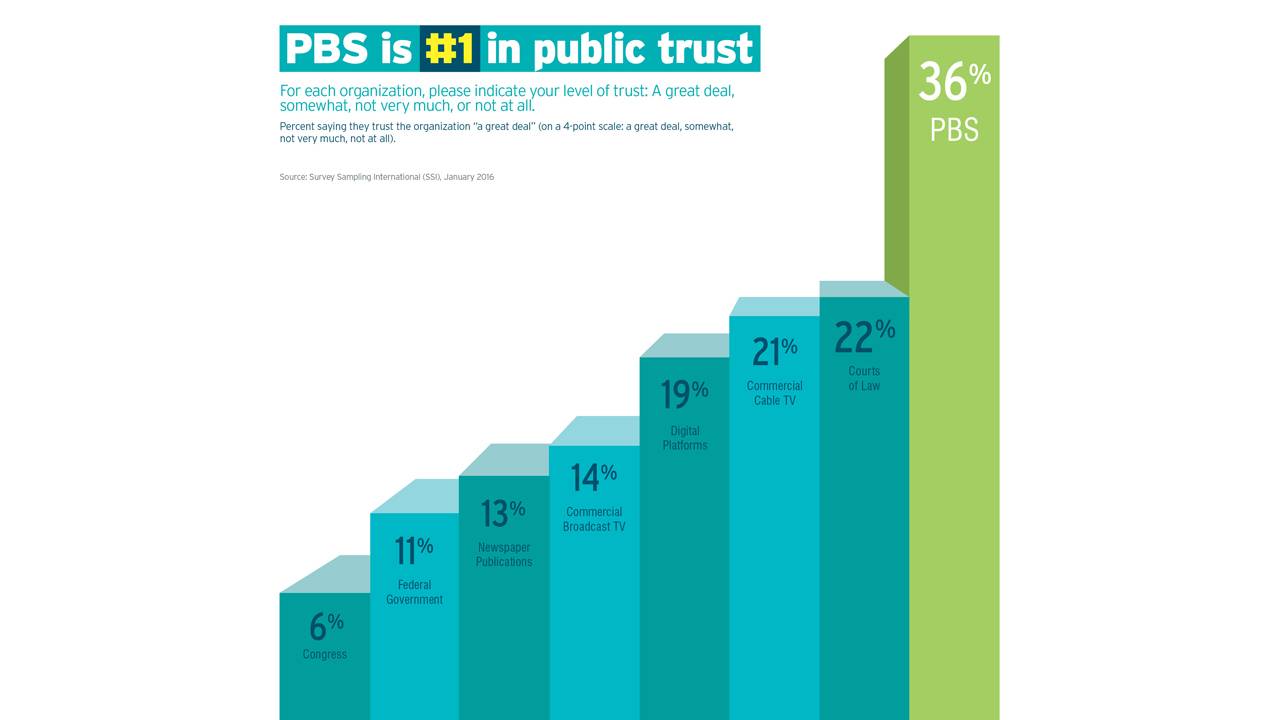 ARLINGTON, VA – February 18, 2016 – A nationwide study recently confirmed that PBS and its member stations are rated #1 in public trust among nationally known institutions, and are called an “excellent” use of tax dollars by the American public for the 13th year in a row.

Results also confirm that the American public ranks PBS KIDS the #1 education brand, the top provider of content that “helps prepare children for success in school and life,” the safest media destination, as well as a leading innovator in educational media and more.

The national poll was created by the research team at PBS and was conducted by telephone in January 2016 by Survey Sampling International (SSI). Each year, PBS commissions research to measure its performance and value as judged by its most important stakeholder – the American people.

“There is nothing more important to the mission of PBS and PBS stations than earning the trust of the American public and serving all of our nation’s children with educational media that enables them to build skills that are key to succeeding in school and life,” said PBS CEO Paula Kerger. “I am tremendously proud that people across the nation see us as the leader in providing children with the tools they need to prepare for the future. PBS and our stations are committed to developing new and innovative ways to reach today’s families and support learning.”

Nearly 8 in 10 people trust PBS (79% “trust a great deal” or “trust somewhat”). The 2016 study marks the 13th time in a row that PBS was called the nation’s most-trusted institution among a consideration set that includes courts of law, commercial cable and broadcast television, newspapers and others. The study found that more than 1 out of 3 participants (36%) trust PBS “a great deal,” significantly outscoring the nearest institution, courts of law (22% “trust a great deal”).

PBS KIDS was ranked #1 as the most educational media brand compared to a range of other television networks.

- Eighty-nine percent (89%) agreed “strongly or somewhat” that PBS “helps prepare children for success in school and life.” Disney and Disney Jr. received this rating from 64% and 68% of respondents, respectively. The statement was attributed to Nickelodeon and Nick Jr. by 57% and 65% of participants, respectively.

PBS is America’s largest classroom, biggest stage for the arts and a trusted window to the world.

Additional results are available at http://to.pbs.org/most_trusted_2016.

This survey was developed by PBS and conducted by phone within the United States by Survey Sampling International (SSI) on behalf of PBS. The poll was fielded from January 4-20, 2016 among 1,000 adults ages 18 and older. The sample included 500 landline and 500 cell phones, and consisted of 517 men and 483 women. Survey results are weighted to be statistically representative of the U.S. adult population.

About PBS
PBS, with 350 member stations, offers all Americans the opportunity to explore new ideas and new worlds through television and online content. Each month, PBS reaches nearly 100 million people through television and nearly 33 million people online, inviting them to experience the worlds of science, history, nature and public affairs; to hear diverse viewpoints; and to take front row seats to world-class drama and performances. PBS’ broad array of programs has been consistently honored by the industry’s most coveted award competitions. Teachers of children from pre-K through 12th grade turn to PBS for digital content and services that help bring classroom lessons to life. PBS’ premier children’s TV programming and its website, pbskids.org, are parents’ and teachers’ most trusted partners in inspiring and nurturing curiosity and love of learning in children. More information about PBS is available at www.pbs.org, one of the leading dot-org websites on the Internet, or by following PBS on Twitter, Facebook or through our apps for mobile devices. Specific program information and updates for press are available at pbs.org/pressroom or by following PBS Pressroom on Twitter. 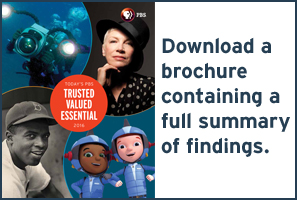