Holidays are Dramatic, Musical, Delicious - and Vicious! All on PBS 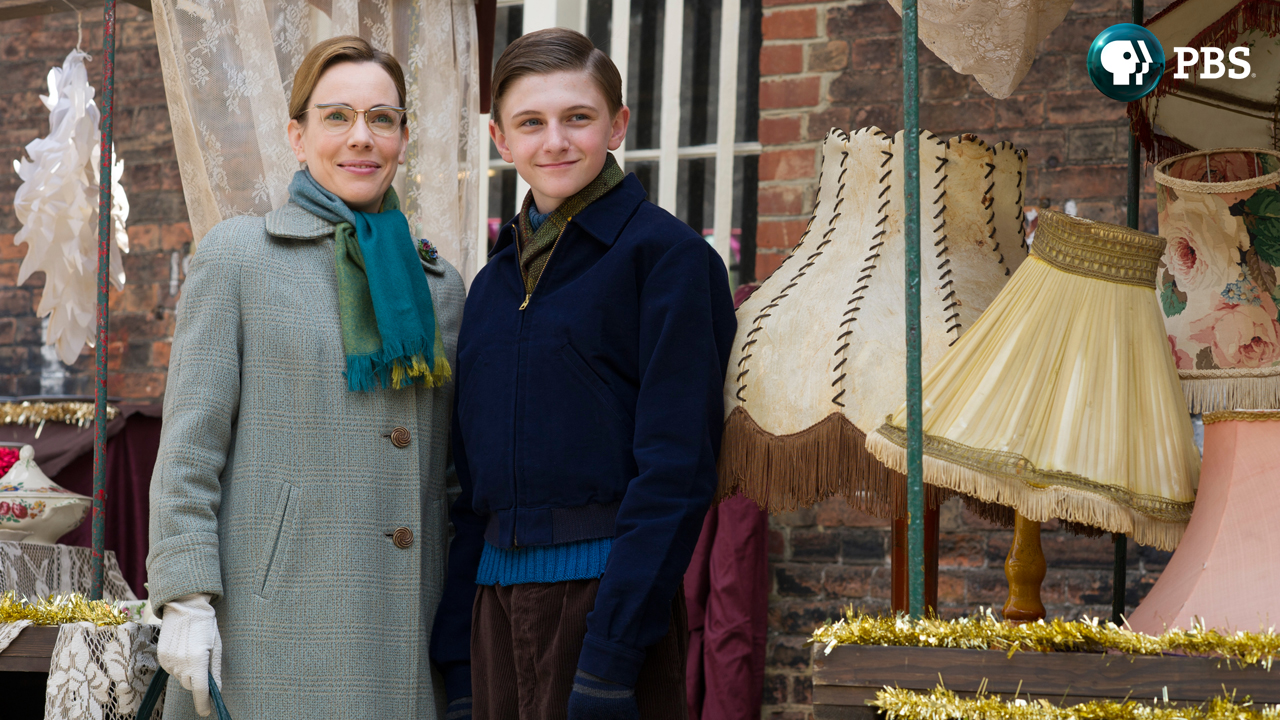 ARLINGTON, VA; NOVEMBER 13, 2014– The holiday season on PBS is a cornucopia of drama, comedy, music and food. Specials from popular series CALL THE MIDWIFE and VICIOUS, music that’s inspirational, festive, classic and jazzy, and a culinary special that draws on Southern and Chanukah traditions add sparkle and spice to the schedule.

The CALL THE MIDWIFE HOLIDAY SPECIAL, airing Christmas night, December 25, 8:00 p.m. ET, follows the nuns and nurses of London’s Nonnatus House as they prepare for the Sunday School Christmas concert and continue their ministrations to the Poplar population. As the year ends, all wonder what 1960 has in store for them. The VICIOUS comedy special, also set in London, follows. Longtime couple Freddie (Ian McKellen) and Stuart (Derek Jacobi) host a holiday party at their flat, where a wicked game of Truth or Dare brings up hidden truths — and some surprises. VICIOUS “Holiday Special” airs December 25, 9:30 p.m. ET.

“This year, Santa’s bringing a little naughty and nice to holiday episodes of VICIOUS and CALL THE MIDWIFE on Christmas night for viewers and their families,” said Beth Hoppe, Chief Programming Executive and General Manager, General Audience Programming, PBS. “Santa’s also checked his list, and has gifts for everyone in the family — from music and performance, to kid’s titles, to seasonal history and food. December on PBS is filled with a variety of festive programs to fit all interests.”

The centerpiece of many seasonal events is — naturally! — food. Chef Vivian Howard draws on her Southern heritage and husband Ben’s Chanukah traditions for a charming and delicious holiday celebration. A CHEF’S LIFE HOLIDAY SPECIAL airs December 16 at 10:00 p.m. ET.

PBS KIDS will kick off the holiday season on November 26 with the return of the classic family favorite CURIOUS GEORGE: A Very Monkey Christmas on PBS stations nationwide. In this fun-filled one-hour special, families can join their favorite monkey and the Man with the Yellow Hat as they count down the days until Christmas. The fun continues throughout December with all new episodes across the schedule on PBS stations. Viewers will help Otto and Olive solve a reindeer case in an all-new episode of ODD SQUAD, celebrate Christmas and Hanukkah with Peg and Cat in a one-hour PEG + CAT + HOLIDAYS special, spread cheer with new engine friends Gator and Reg on THOMAS & FRIENDS and go on a winter adventure featuring The Nutcracker Ballet with Daniel Tiger. Select clips and full episodes will also be available on pbskids.org, the PBS KIDS Video App and PBS KIDS on Roku, Apple TV, Chromecast and Amazon Fire. For listings and more information, click here.

Celebrate the holidays with PBS and enjoy special programming online, get tips on how to prepare for family gatherings, plan your shopping list, enjoy music from our holiday playlists, make crafts with your children and get great meal ideas from both PBS Food and PBS Parents.

PBS LearningMedia has expanded its digital library with the addition of a new Holiday Collection featuring curriculum-targeted resources that align to key celebrations throughout the year. Teachers and students of all ages can use these digital resources to enhance classroom activities and homework assignments, or to construct interactive storyboards using PBS LearningMedia’s new suite of productivity tools. Currently, the collection delves into the history of Halloween and Columbus Day, among others, and will soon include additional resources about Thanksgiving, Hanukkah, Christmas, Kwanza, Valentine’s Day, Presidents Day and Ramadan. Explore the collection today by visiting pbslearningmedia.org/collection/holidays.

Celebrate the magic of the season with the acclaimed soprano and guests Kurt Elling, Kelli  O’Hara, Gregory Porter and Rufus Wainwright. The most wonderful time of the year is captured in unique musical performances of favorite holiday songs and carols.

Bruce Feiler embeds with a group of active duty and retired U.S. military, wounded in Afghanistan, Iraq and other American wars, as they travel to the Catholic shrine of Lourdes in southwest France in search of healing. More than five million pilgrims visit this shrine to the Virgin Mary every year to bathe in the waters of a spring that Catholics believe has miraculous powers. The wounded warriors from America join 30,000 other military and their families from 35 different nations on an International Military Pilgrimage that’s now in its 55th year.

Chef Vivian Howard serves up the best of her Southern cooking heritage and husband Ben’s Chanukah traditions. From a simple corned ham to an upscale oyster dressing, from humble Hoppin’ John to an elegant red velvet cake, this is a charming and delicious holiday celebration.

Leading dramatic soprano Deborah Voigt and acclaimed British actor and voice artist John Rhys-Davies join the Mormon Tabernacle Choir and Orchestra at Temple Square in a concert of holiday favorites.  Among the highlights are Voigt’s performances of “The Holly and the Ivy” and the light-hearted “The Twelve Days After Christmas” and Rhys-Davies’ dramatization of “A Dickens Christmas” as the Ghost of Christmas Present. In a dazzling scene of aerial choreography, he soars overhead at the LDS Conference Center.

Host Bruce Feiler travels to Israel with Jewish and Christian pilgrims. Walking with Christian pilgrims on the Jesus Trail, celebrating Sukkot, the Feast of the Tabernacles, with American Jews in Jerusalem and exploring the past with scholars of the three faiths — Judaism, Christianity and Islam — that share Jerusalem, Feiler reveals a land where religious and historical divisions have made it the most contentious place on earth.

Rehearsals for the Sunday School Christmas concert are underway, creating inconvenience for the nuns and nurses of Nonnatus House. Two unmarried patients are dispatched to York Lodge, a badly managed home for pregnant women. Chummy takes over running the facility after an outbreak of chicken pox there. Dr. Turner treats a destitute older couple, former residents of a mental hospital closed under the mental health reforms. As residents of Nonnatus welcome the new year, the question on everyone’s mind is, what will 1960 bring?

PBS continues the cherished tradition of ringing in the New Year at the opulent Musikverein with the Vienna Philharmonic under the baton of guest conductor Zubin Mehta, and featuring everyone’s favorite Strauss Family waltzes accompanied by the beautiful dancing of the Vienna City Ballet. In addition to the Musikverein concert setting, the broadcast features a picturesque range of Vienna landmarks. Stage and screen legend Julie Andrews returns as host.

From Trondheim’s historic Nidaros Cathedral, this holiday concert features the St. Olaf Choir from St. Olaf College and the Norwegian girl choir, Nidaros Jentekor. The production pairs the cathedral’s gothic beauty and stunning acoustics with the distinctive a cappella singing style for which the St. Olaf Choir — which owes its origins and legacy to Norway — is internationally known. Musical selections include innovative arrangements of Christmas music, gospel spirituals and Norwegian hymns and folk songs.

FRONTLINE presents the epic story of the rise of Christianity. Drawing upon new and sometimes controversial historical evidence, the series transports viewers back 2,000 years to the time and place where Jesus of Nazareth once lived and preached and challenges familiar assumptions and conventional notions about the origins of Christianity. The first program traces the life of Jesus of Nazareth, exploring the message that helped his ministry grow and the events that led to his crucifixion around 30 C.E. The second program examines the period after the first revolt, tracing the development and impact of the Gospels and looking at the increasingly hostile relationship between the Christians and the Jews.