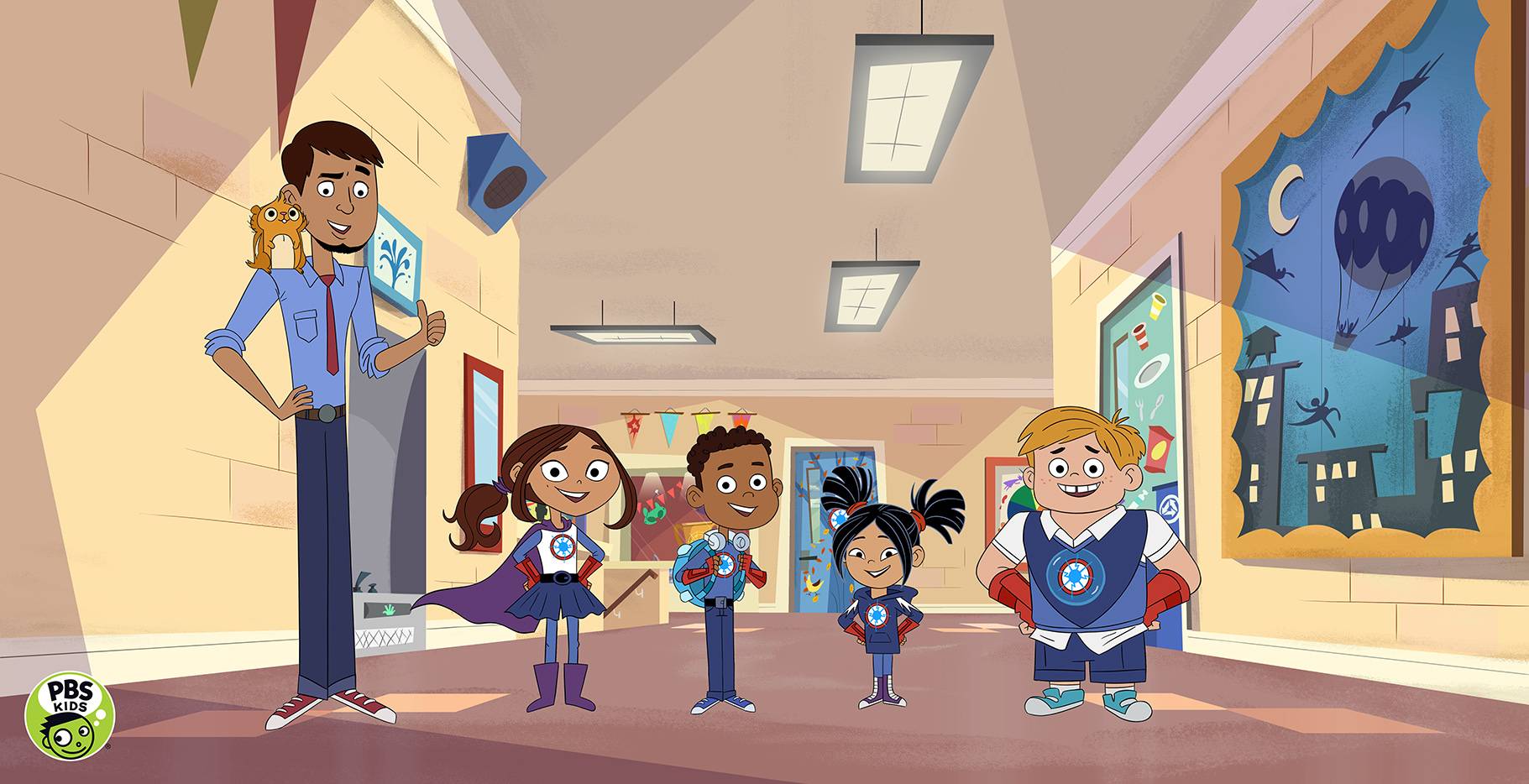 HERO ELEMENTARY is a school for budding superheroes, where kids learn to master their innate powers, like flying and teleportation, while exploring science along the way. The launching series will give children ages 4 to 7 important tools to help them solve problems by encouraging them to think and act like scientists, igniting their natural curiosity. HERO ELEMENTARY also showcases character and social-emotional concepts such as kindness, empathy, and commitment to working together to solve problems.

“With its unique, fun and informative STEM, literacy and social-emotional learning curriculum, HERO ELEMENTARY is sure to be a heroic hit with kids, parents and teachers alike,” said Linda Simensky, Head of PBS KIDS Content.

The stories in HERO ELEMENTARY center around a diverse group of super students, led by their quirky and enthusiastic teacher, Mr. Sparks. The team works together to help people, solve problems, and try to make the world a better place. When their imperfect powers aren’t up to the task, they look to their other powers – the superpowers of science – to help them investigate, observe, make predictions, and figure out a solution.

The “Sparks’ Crew” includes Lucita Sky, an empathetic natural leader with the power to fly – and a fear of heights; AJ Gadgets, a superhero who is passionate about all things “super” and has the ability of thought projection and making super gadgets – and who also happens to be on the Autism spectrum; Sara Snap, who’s tiny, but mighty, with super strength and the power to teleport; and Benny Bubbles, a loyal and protective animal lover with a heart of gold, who can create amazing bubbles that double as forcefields and more. Both Mr. Sparks and Lucita are bilingual Spanish/English speakers. Rounding out the Crew is Fur Blur, the class hamster with an epic appetite and super speed.

“HERO ELEMENTARY has the right formula to help empower kids to make a difference in their own backyards and beyond by actively doing science,” said series co-creator Carol-Lynn Parente, who formerly executive produced SESAME STREET, where she met HERO ELEMENTARY co-creator Christine Ferraro. “The series combines excitement of superheroes and the power of science to help show kids that they can be superheroes and save the day, too.”

The science curriculum in HERO ELEMENTARY addresses crucial components of children’s learning – the ability to develop and test ideas, ask questions, predict, and observe – skills known to contribute to learning in other content areas, such as literacy, language development and critical thinking. Each episode will include two animated 11-minute stories with accompanying interstitial content. The series is currently in production for 40 half-hour episodes, which will premiere on PBS stations, the PBS KIDS 24/7 channel and PBS KIDS digital platforms.

Along with the television series, the HERO ELEMENTARY universe will include a collection of interactive digital components to supplement and expand the television world, reinforce learning, and encourage interactive play for kids everywhere. HERO ELEMENTARY games will be available on pbskids.org and on the free PBS KIDS Games App, along with clips and full episodes streaming across PBS KIDS’ video platforms, including the free PBS KIDS Video App. A collection of HERO ELEMENTARY parent and educator resources will be available onPBS KIDS for ParentsandPBS LearningMedia, respectively.

HERO ELEMENTARY is funded by a Ready To Learn grant from the U.S. Department of Education. The Ready To Learn Initiative is a federal program that supports the development of innovative educational television and digital media targeted to preschool and early elementary school children and their families.

About Twin Cities PBS
The mission of Twin Cities PBS (TPT) is to enrich lives and strengthen our community through the power of media. As one of the nation’s leading public media organizations, TPT uses television, interactive media and community engagement to advance education, culture and citizenship. In its nearly 60-year history, TPT has been recognized for its innovation and creativity with numerous awards, including Peabody awards, and national and regional Emmys. Based in Saint Paul, MN, TPT is one of the most highly viewed public TV stations in the nation, reaching more than 1.7 million people each month through multiple broadcast and digital platforms. The organization’s particular areas of focus include: the educational readiness of children; serving the needs and unleashing the potential of America’s aging population; engaging a new generation in the power of public media; and being the preferred media partner for organizations that align with our mission to enrich lives and strengthen community.  For more information about TPT, visit our website at www.tpt.org or join us on Facebook and Twitter.

About Portfolio
Portfolio Entertainment is a leading media company specializing in the production, distribution and animation of kids and family entertainment for television and digital media content providers worldwide. Portfolio’s most notable projects include The Cat in the Hat Knows A Lot About That! (PBS/Treehouse); DOKI (Discovery Kids); and Freaktown (Teletoon). The company’s Toronto headquarters house Portfolio Animation, a creator-driven 2D Harmony animation studio. Its distribution division represents over 1,500 half-hours of animated and live-action programming seen on broadcasting and streaming platforms across 110 markets worldwide.