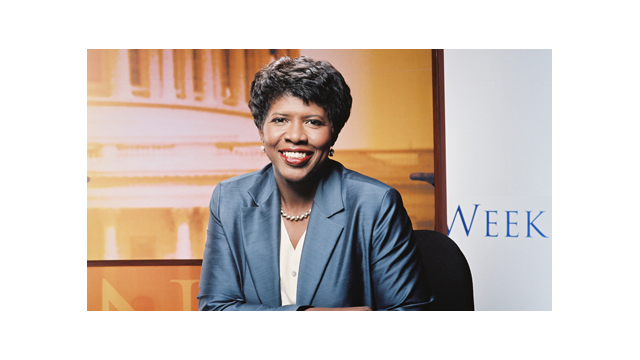 PBS Annual Meeting, Denver, Co., May 16, 2012 – PBS today announced that journalist Gwen Ifill is the recipient of the eighth annual PBS “Be More” Award, which celebrates individuals in public television who embody the spirit of helping Americans to discover more, to experience more and to “Be More.” The award was presented to Ms. Ifill by PBS President and CEO Paula Kerger at the PBS Annual Meeting in Denver.

“Gwen is one of the best journalists in the country,” said Ms. Kerger. “She is among the most trusted people on television, someone to turn to for insightful, in-depth coverage of news and issues that matter. She represents journalism at its best: she’s skeptical about everything but cynical about nothing.”

Before joining WASHINGTON WEEK and PBS NEWSHOUR in 1999, Ms. Ifill was chief congressional and political correspondent for NBC News, White House correspondent for The New York Times, and a local and national political reporter for The Washington Post. During her career, she has received more than a dozen honorary doctorates and is the recipient of several broadcasting excellence awards, including a George Foster Peabody Award and Harvard University John F. Kennedy School of Government’s Goldsmith Career Award for Excellence in Journalism.

The PBS "Be More" Award is an annual award that recognizes extraordinary individuals who inspire public television viewers to expand their horizons, to experience growth and adventure, to explore new ideas and to be more. Based on PBS' award-winning “Be more” brand campaign, the award’s previous recipients are Ken Burns, Joan Ganz Cooney, Rebecca Eaton, Jim Lehrer, Bill Moyers, Fred Rogers and Neil deGrasse Tyson.