Posted by PBS Publicit y on 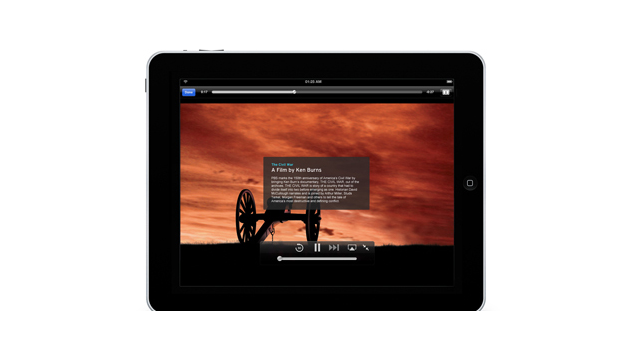 Acclaimed Documentary to be Re-broadcast April 3rd on PBS, Timed to the 150th Anniversary of the Start of the Civil War

Arlington, VA – March 22, 2011 – PBS announced today that the first episode of THE CIVIL WAR, the award-winning film by Ken Burns that first aired in 1990, will premiere on the free PBS for iPad and PBS App for the iPhone and iPod Touch beginning on March 24 for ten days prior to the highly anticipated re-broadcast of the entire film.  PBS will make the first episode available for free download at the iTunes store at the same time.

Marking their 1.2 millionth download since launch, the PBS video Apps features 250 hours of free video, including full-length programs, as well as TV schedules, previews, and a tune-in reminder calendar that can be synced with iCal. The PBS for iPad and PBS App for the iPhone and iPod Touch are available for free from the App Store.

“PBS.org has grown so rapidly that comScore VideoMetrix listed it as the18th most popular site for video last month," said Jason Seiken, SVP, PBS Interactive and Product Development.  "And just four months after launching our apps, nearly 20 percent of our video streams come from users of our Apps for iPad, iPhone, and iPod Touch."

Timed to the 150th anniversary of the start of the Civil War on April 12, the entire series will air nationally on PBS beginning Sunday, April 3, through Thursday, April 7, from 8:00 to 10:00 p.m.  Following the rebroadcast premiere of the film, the first episode will also be streamed on pbs.org beginning on Monday, April 4, and will be available there through Sunday, April 10.  All episodes will be available for purchase on DVD at shoppbs.org or iTunes.

“THE CIVIL WAR remains the highest rated series for PBS, and it was a milestone in the history of documentary film and television,” said John F. Wilson, SVP & Chief TV Programming Executive at PBS.  “Twenty-one years after its premiere, the re-mastered film continues to be relevant and gripping.  We’re thrilled to present this 19th century story, so riveting and critical to our country’s history, by using 21st century technology.”

THE CIVIL WAR attracted an audience of 40 million during its premiere in September 1990.  Narrated by David McCullough, THE CIVIL WAR was directed by Ken Burns; produced by Ken Burns and Ric Burns; written by Geoffrey C. Ward, Ric Burns and Ken Burns; and edited by Paul Barnes, Bruce Shaw and Tricia Reidy. The film’s cinematography was by Ken Burns, Allen Moore and Buddy Squires; the coordinating producer was Catherine Eisele; associate producer, Lynn Novick; and co-producers, Stephen Ives, Julie Dunfey and Mike Hill.  Financial support for THE CIVIL WAR was provided by General Motors Corporation, the National Endowment for the Humanities, the Corporation for Public Broadcasting, the Arthur Vining Davis Foundations and the John D. and Catherine T. MacArthur Foundation.

PBS, with its nearly 360 member stations, offers all Americans — from every walk of life — the opportunity to explore new ideas and new worlds through television and online content. Each month, PBS reaches 117 million people through television and 20 million people online, inviting them to experience the worlds of science, history, nature and public affairs; to hear diverse viewpoints; and to take front row seats to world-class drama and performances. PBS’ broad array of programs has been consistently honored by the industry’s most coveted award competitions. Teachers of children from pre-K through 12th grade turn to PBS for digital content and services that help bring classroom lessons to life. PBS’ premier children’s TV programming and its website, pbskids.org, are parents’ and teachers’ most trusted partners in inspiring and nurturing curiosity and love of learning in children. More information about PBS is available at www.pbs.org, one of the leading dot-org websites on the Internet, or by following PBS on Twitter, Facebook or through our apps for mobile devices. Specific program information and updates for press are available at pbs.org/pressroom or by following PBSPressroom on Twitter.