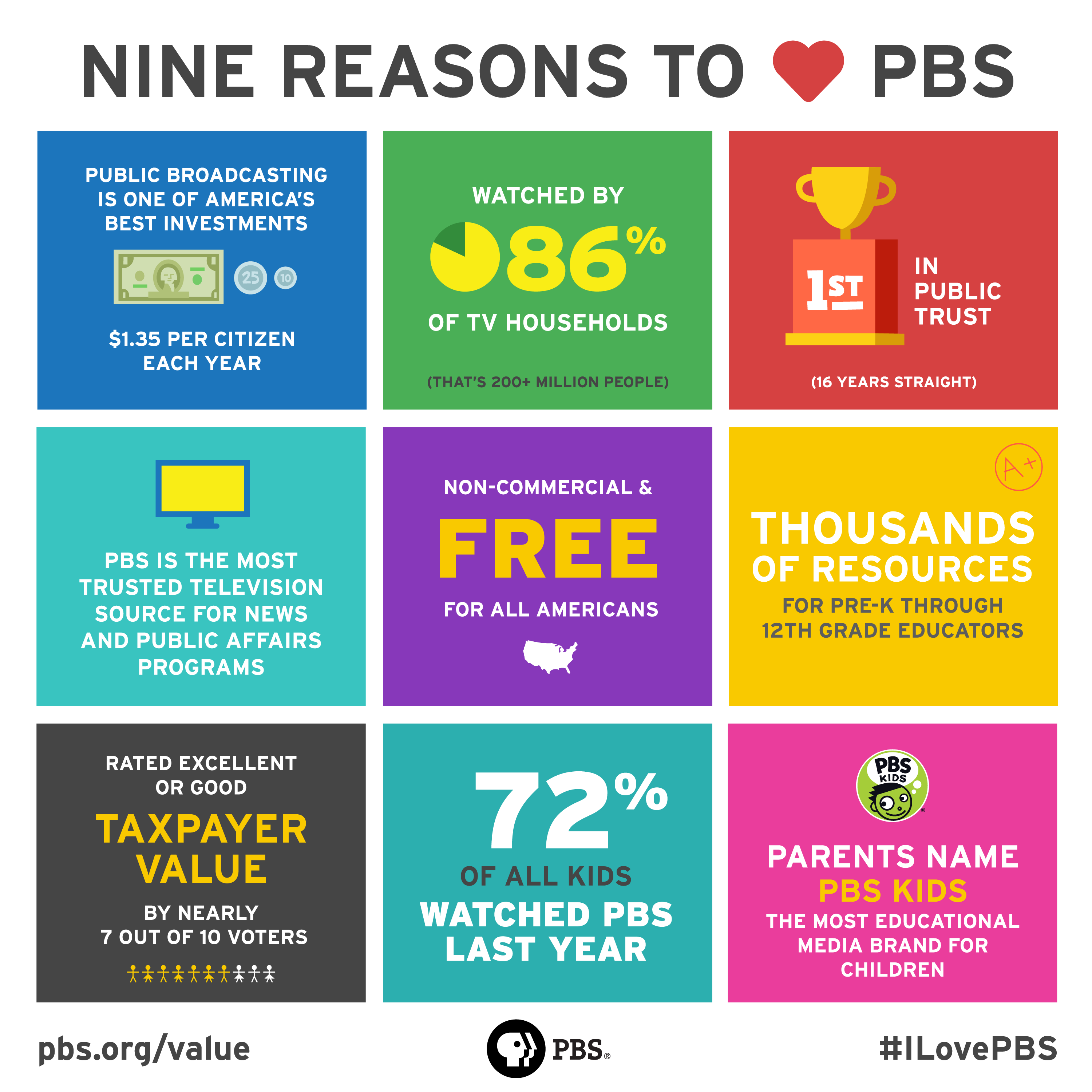 PBS is the Most Trusted Source of News and Public Affairs Programming and PBS KIDS is the Most Educational Media Brand, According to Annual Survey

PASADENA, CA; February 2, 2019 -- For the 16th consecutive year, PBS and its member stations have been named #1 in public trust among American institutions in a nationwide annual survey. According to the findings released today, Americans rank PBS as more trustworthy than institutions such as courts of law, the federal government and Congress, as well as media sources such as digital platforms, commercial broadcast and cable television, newspapers and social media. Respondents also said that PBS was their most trusted source of news and public affairs programming.

Among those surveyed, 71% feel that local PBS stations provide excellent value to communities. Further, when asked about value for tax dollars, PBS ranks only below our nation’s military defense, and ahead of social security, infrastructure, environmental protection and other vital services.

PBS KIDS is also viewed by parents as the most educational media brand, substantially outranking other cable and commercial networks: 66% said the brand is their top choice for children. The survey results also affirm that parents view PBS KIDS as a leader in preparing children for success in school, modeling positive social and emotional behaviors, and as the most trusted and safe source for children to watch television, and play digital games and mobile apps.

“For the 16th year in a row, Americans continue to place their trust in PBS and our local stations. Public television is a trusted destination for high-quality news and public affairs programming, and parents turn to PBS for educational media that prepares their children for future success,” said Paula Kerger, President and CEO, PBS. “We build trust by staying true to our founding mission – being a beacon of thoughtful and thought-provoking content that both educates and inspires.”

PBS KIDS was ranked the #1 educational media brand for children, compared with a host of other children’s media providers.

To learn more about how PBS and local member stations are trusted, valued and essential to communities across the country, visit pbs.org/value.

Survey Methodology
This survey was developed by PBS and conducted online within the United States, by Marketing & Research Resources, Inc. (M&RR) on behalf of PBS from January 3-8, 2019, among 1,015 adults ages 18 and older. The sample included 490 men and 525 women.  The results are weighted to be nationally representative of the US adult population.

About PBS
PBS, with nearly 350 member stations, offers all Americans the opportunity to explore new ideas and new worlds through television and digital content. Each month, PBS reaches nearly 90 million people through television and 30 million people online, inviting them to experience the worlds of science, history, nature and public affairs; to hear diverse viewpoints; and to take front row seats to world-class drama and performances. PBS’ broad array of programs has been consistently honored by the industry’s most coveted award competitions. Teachers of children from pre-K through 12th grade turn to PBS for digital content and services that help bring classroom lessons to life. Decades of research confirms that PBS’ premier children’s media service, PBS KIDS, helps children build critical literacy, math and social-emotional skills, enabling them to find success in school and life. Delivered through member stations, PBS KIDS offers high-quality educational content on TV – including a 24/7 channel, online at pbskids.org, via an array of mobile apps and in communities across America. More information about PBS is available at www.pbs.org, one of the leading dot-org websites on the internet, or by following PBS on Twitter, Facebook or through our apps for mobile and connected devices. Specific program information and updates for press are available at pbs.org/pressroom or by following PBS Pressroom on Twitter.