Delightful Programs Set the Holiday Mood This Season on PBS 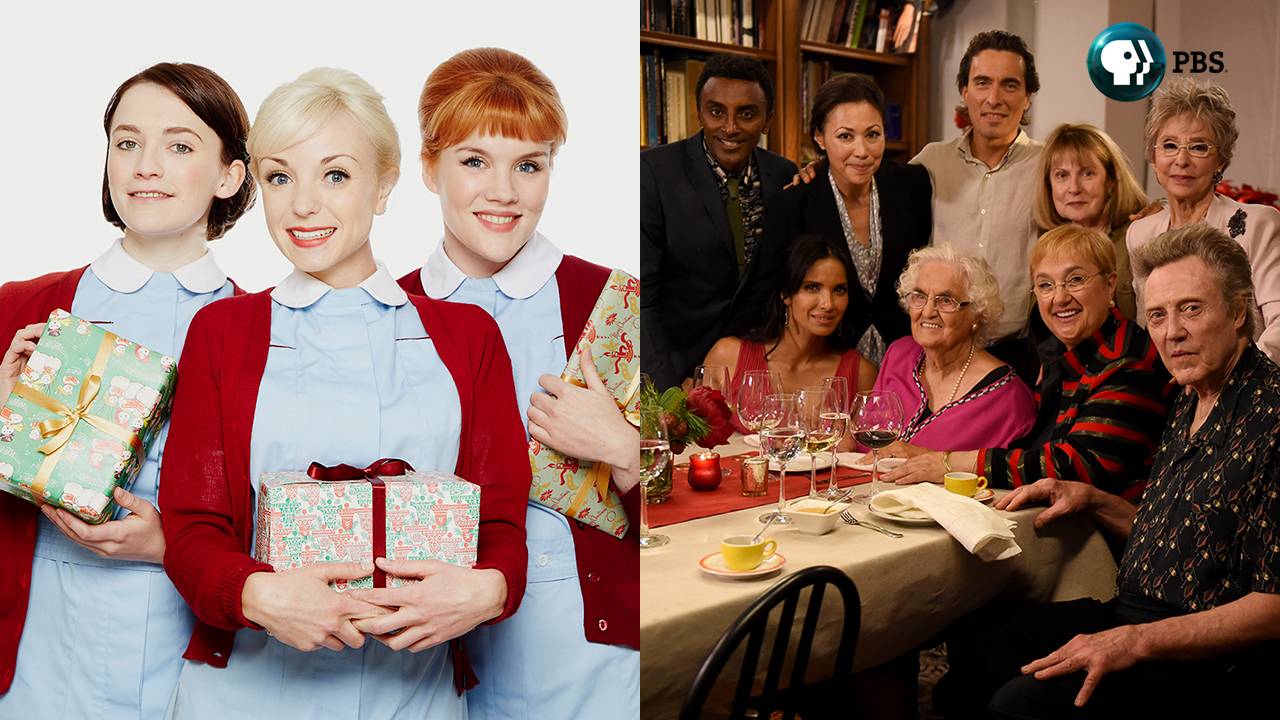 – Highlighting the Schedule, Midwives and Nuns of Nonnatus Prepare for Their Close-up in a CALL THE MIDWIFE HOLIDAY SPECIAL; New Sherlock Special from MASTERPIECE MYSTERY! Premieres on New Year’s Day; A Concert with the Mormon Tabernacle Choir and Special Guests; Christopher Walken and Rita Moreno Join Lidia Bastianich in “Home for the Holidays” –

ARLINGTON, VA; NOVEMBER 23, 2015 – The holiday season on PBS dazzles this year with programs and specials that will delight the entire family, featuring inspirational music, savory cuisine and beloved characters from across the pond. PBS returns to London’s Poplar neighborhood in time for Christmas 1960 in the CALL THE MIDWIFE HOLIDAY SPECIAL. Joyous spirits are in plentiful supply as the community pulls together to prepare for a carol concert — to be televised by the BBC. In addition, a trip to view the Regent Street lights and a full-scale manhunt for a missing Nonnatus nun make this a Christmas to remember. The special airs on Christmas day, Friday, December 25, 2015, 9:00-10:30 p.m. ET (check local listings). And, as recently announced, the highly anticipated “Sherlock: The Abominable Bride,” a 90-minute special premiering at 9:00 p.m. ET on Friday, January 1, 2016 on MASTERPIECE MYSTERY! (see a clip here), bookends PBS’ holiday programming schedule.

“Kicking off in December and culminating with the Sherlock special from MASTERPIECE Mystery! on New Year’s Day, our holiday schedule this year features programs we know our viewers and their families will enjoy,” said Beth Hoppe, Chief Programming Executive and General Manager, General AudienceProgramming, PBS. “From festive holiday music, to performances with beautiful winter backdrops, to colorful food and crafts, to the exploration of special time-honored traditions, there is something for everyone this holiday season.”

Examine the role craft plays in our holiday customs, especially winter celebrations and traditions. Observe the artisans who create ceramics for Christmas, holiday cards, candleholders for Kwanzaa and the floats and lion heads for Chinese New Year.

Join renowned star of stage and song Santino Fontana, the Muppets® from Sesame Street® and the Mormon Tabernacle Choir and Orchestra at Temple Square for a magical holiday extravaganza. The concert includes a medley of songs from SESAME STREET and inspiring arrangements of sacred Christmas music.

Join the revels as Poplar readies itself for Christmas 1960. An unexpected surprise for a grieving mother brings the holiday magic home, while Nonnatus is rocked when one of its own disappears. A film crew promises to make this a memorable Christmas.

Ring in a new year with the Philharmonic and the sounds of Paris, featuring Alan Gilbert and Susan Graham in music by Ravel, Offenbach and Saint-Saëns.

Join Vivian Howard for a taste of the holidays as she serves up the best of her Southern heritage and the Chanukah traditions of husband Ben. Sample simple corned ham, upscale oyster dressing, humble Hoppin’ John, elegant red velvet cake and more.

Enjoy Charles Dickens’ classic, adapted from the original for orchestra, choir and soloists. The celebration of storytelling and ensemble performances provides the comforts of a classic tale with the thrill of experiencing the story in a new way.

See how pride and mischief inspire Chinese immigrant Tom to challenge his American neighbors to survive Christmas without Chinese products. Accepting the mission-impossible, the Jones family is drawn into an intercultural exchange with Tom’s family.

PBS LearningMedia has expanded its digital library with the addition of a new Holiday Collection featuring curriculum-targeted resources that align to key celebrations throughout the year. Teachers and students of all ages can use these digital resources to enhance classroom activities and homework assignments, or to construct interactive storyboards using PBS LearningMedia’s new suite of productivity tools. Currently, the collection delves into the history of Halloween, Columbus Day, Thanksgiving, Hanukkah, Christmas, Kwanza, Valentine’s Day, Presidents Day and Ramadan, among others, with additional videos added frequently. The collection also includes holiday-related classroom activities, holiday reading guides and content from favorite PBS KIDS shows. Explore the collection today by visiting pbslearningmedia.org/collection/holidays.

About PBS
PBS, with its 350 member stations, offers all Americans the opportunity to explore new ideas and new worlds through television and online content. Each month, PBS reaches more than 103 million people through television and over 33 million people online, inviting them to experience the worlds of science, history, nature and public affairs; to hear diverse viewpoints; and to take front row seats to world-class drama and performances. PBS’ broad array of programs has been consistently honored by the industry’s most coveted award competitions. Teachers of children from pre-K through 12th grade turn to PBS for digital content and services that help bring classroom lessons to life. PBS’ premier children’s TV programming and its website, pbskids.org, are parents’ and teachers’ most trusted partners in inspiring and nurturing curiosity and love of learning in children. More information about PBS is available at www.pbs.org, one of the leading dot-org websites on the Internet, or by following PBS on Twitter, Facebook or through our apps for mobile devices. Specific program information and updates for press are available at pbs.org/pressroom or by following PBS Pressroom on Twitter.