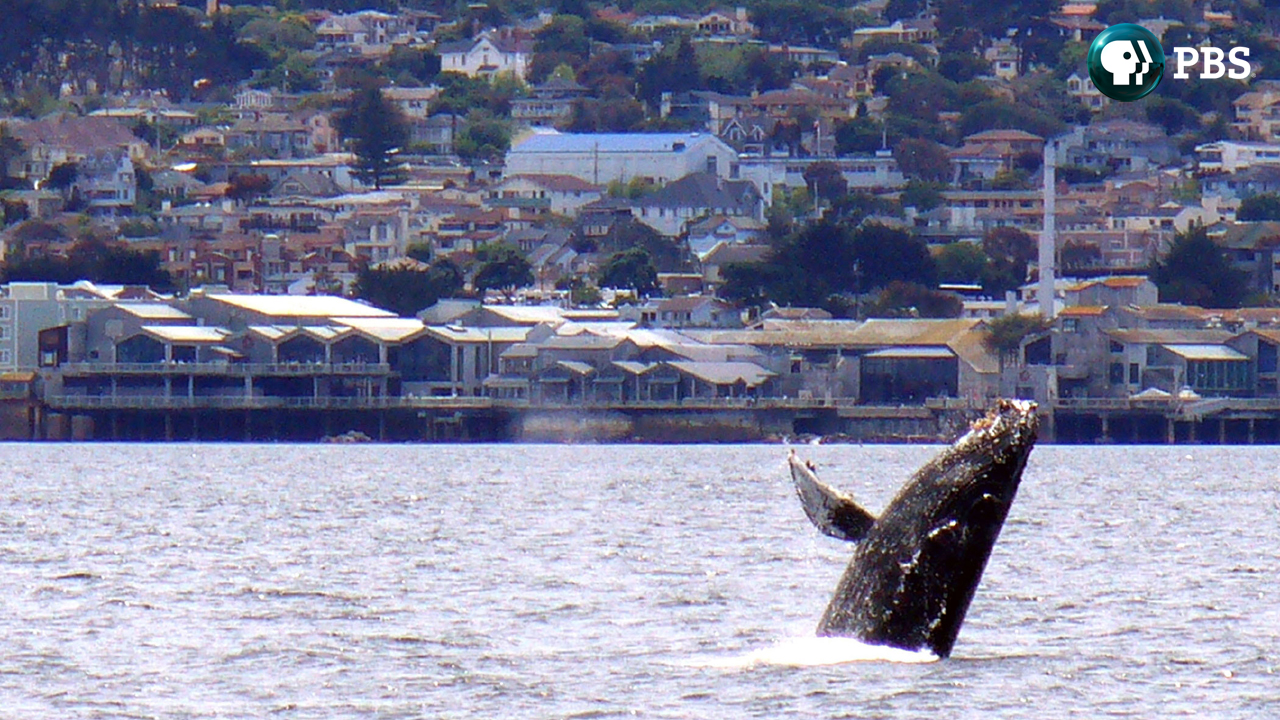 Digital and Social Hub for BIG BLUE LIVE is PBS.org/BigBlueLive

Arlington, VA; July 29, 2015 -- BBC and PBS released details today about the first-of-its-kind multimedia coproduction between BBC and PBS, BIG BLUE LIVE, which will air live on PBS over three nights, Aug. 31-Sept. 2, 2015, at 8:00-9:00 p.m. ET, with a second live feed to the west coast at 8:00-9:00 p.m. PT. BBC airs its own live broadcast in the UK, streaming online and through social media for UK viewers. Scientists, filmmakers, photographers and other experts will come together for two weeks in late August to film some of the world’s most charismatic marine creatures — humpback whales, sea lions, dolphins, elephant seals, sea otters, great white sharks, shearwaters, brown pelicans, blue whales and more — gathering at this time of year in Monterey Bay to feed on the abundance of food in these waters. Monterey Bay’s unique underwater geography, with a deep ocean canyon close to shore, brings species by the thousands into the once endangered, now thriving, ecosystem of the Monterey Bay National Marine Sanctuary in California.

In both PBS feeds, viewers can watch one of nature’s great reality shows, delivered through state-of-the-art filming technologies and live reports from air, by boat and below the waves. The multi-platform event will be anchored by two anchors, with several on-air correspondents and additional leading scientists and experts providing insights during the program. BIG BLUE LIVE will be broadcast from the Monterey Bay Aquarium and from aboard Monterey Bay National Marine Sanctuary vessels, as well as from Monterey shoreline locations. In addition to the live portions of the programs, BBC and PBS crews have been filming video and b-roll footage over the course of the summer, which will be rolled into each broadcast to expand upon what is being seen live.

On-air anchors for the U.S. shows include Dr. M Sanjayan, host of EARTH A New Wild — recently broadcast on PBS — who is senior scientist at Conservation International, and UK-based science broadcast journalist Liz Bonnin, known for BBC science programs BANG GOES THE THEORY and STARGAZING LIVE. Dr. Joy Reidenberg, a comparative anatomist and marine mammal expert, featured in PBS’s INSIDE NATURE’S GIANTS and SEX IN THE WILD, will provide scientific insight into the anatomy of Monterey Bay marine life. On-air correspondents include Steve Backshall, best known for his work in the U.K. on BBC’s DEADLY 60.

BIG BLUE LIVE airs live over three nights; some of what audiences can expect to see include:

Episode 1 – Follow migrating whales, sharks and various birds as they join sea otters, sea lions and other species that live full-time in Monterey Bay. Watch reports from Monterey Aquarium and NOAA research vessels and get facts about humpback whale anatomy.

Episode 2 – Dive into the hidden world of Monterey’s sea lions and hear about the bay’s rejuvenation through sea otters’ return. Join a scientist who’s trying to help solve the mystery of shark migration and study the anatomy of white sharks and elephant seals.

Episode 3 – Follow the team on the water and in the sky as they search for the giant of the sea: the blue whale. Venture inside the whale with Dr. Reidenberg and join Sanjayan on an incredible journey to get up close and personal with these giants of the deep.

“PBS and BBC continue to break new ground in science and nature programming on BIG BLUE LIVE,” said Beth Hoppe, Chief Programming Executive and General Manager, General Audience Programming, PBS. “Through TV and other PBS digital platforms, viewers can experience and participate in the drama of the ultimate reality show as it unfolds in the natural world.”

“This is the story of an extraordinary gathering, at a unique place, at one special moment in time,” said James Honeyborne, Executive Producer, Natural History Unit, BBC. “With BIG BLUE LIVE, we are going to explore, understand and celebrate this gathering — providing a real-time adventure above, on and beneath the waves. It’s a story to celebrate will inspire viewers of all ages."

“The prospect of getting such privileged access to this ocean phenomenon and bringing it to viewers live on BBC One and PBS is exciting and humbling,” said Natalie Humphreys, BBC Controller, Factual and Daytime Production. “We’ve gathered an extraordinary team, on and off screen, to take us deep into the lives of a host of animals, from sea otters to humpback whales, and we’re thrilled to be co-producing this event.”

The multi-platform, digital experience for BIG BLUE LIVE will be at PBS.org/BigBlueLive, where users can watch the live streaming simulcast of each night’s broadcast and interact with a series of live marine wildlife cameras throughout Monterey Bay. The site will also serve a social hub, by helping the audience discover, explore and join the national conversation about the series, including perspectives from the local communities of PBS member stations.

Photographs, videos, animated GIFs and live streams via Periscope will fuel social media integration of BIG BLUE LIVE with PBS, BBC, Monterey Bay Aquarium and NOAA’s Office of National Marine Sanctuaries. To participate in the conversation, and for a chance to have their post featured on the website’s social mosaic, fans are encouraged to use hashtag #BigBlueLive across social media.

Leading up to the broadcast, Monterey Bay’s animal superstars will be introduced via character cards and a multi-platform picture quiz across Facebook, Twitter, Instagram, Tumblr and other platforms. During the broadcast, PBS will utilize SnappyTV, a video publishing and distribution platform that allows for editing and sharing rich media content across social platforms in real time. Viewers of the three nights of live broadcasts will be exposed to an interactive experience on social, online and on-air that includes live polls, real-time Q&As and caption contests among other surprises that could unlock exclusive content. Co-hosts Dr. M Sanjayan (@msanjayan) and Liz Bonnin (@lizbonnin), and Joe Hanson (@jtotheizzoe), PBS Digital Studios host of “It’s Okay to Be Smart,” will also live-tweet and engage with audiences by responding to questions and comments.

This fall, BIG BLUE LIVE will extend its reach into classrooms through PBS LearningMedia, a free media-on-demand service for educators, students and homeschooling families nationwide. Through a suite of newly created resources including interactives, lesson plans and videos, students will be able to make deeper connections to marine science and conservation topics. In addition, On Tuesday September 1 at 7:00pm ET, PBS will be hosting a live, interactive discussion where students can submit questions using #BigBlueClass to be answered by the experts at Monterey Bay. For more information follow @PBSLrnMedia on Twitter or visit http://www.pbslearningmedia.org/events/

A special DVD version of BIG BLUE LIVE will be available from PBS Distribution: ShopPBS.org; 800-PLAY-PBS, 24 hours a day, 7 days a week.

Funding for BIG BLUE LIVE has been provided by the Anne Ray Charitable Trust.

BIG BLUE LIVE is the first of the new multi-title co-production deal, announced earlier this year, between PBS, BBC, and BBC Worldwide North America. The partnership provides a pipeline of the high-quality, entertaining factual programs that PBS and BBC audiences have come to expect.

About BBC The BBC has an unrivalled global reputation for the factual content it produces across arts, history, documentaries and natural history, and broadcasts some 7,000 hours of high-quality, distinctive factual programs a year on television. The BBC is recognized as an industry leader in terms of innovation, consistently pushing the boundaries of its productions, delivered to our audience by the most engaging and inspirational experts.

For more information on this and other PBS programs, visit PBS PressRoom at pbs.org/pressroom.