BBC and PBS to Bring Second Season of Critically Acclaimed Drama "CALL THE MIDWIFE" to the U.S. 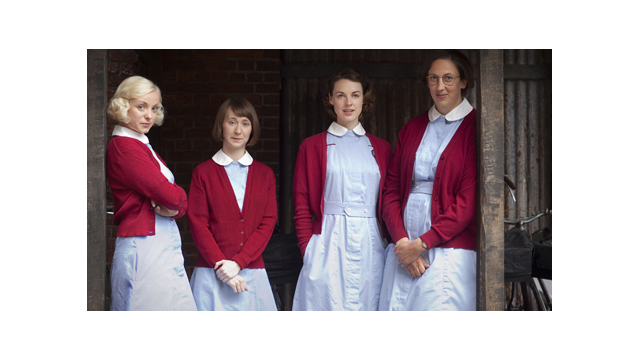 ARLINGTON, VA – December 6, 2012 -- BBC Worldwide America Sales & Distribution and PBS announced today they have signed a deal that brings a second season of the critically-acclaimed British drama CALL THE MIDWIFE to PBS, with new episodes to start airing on March 31, 2013, at 8:00 p.m. ET.

The six episodes of CALL THE MIDWIFE season one drew an average household audience rating of 2.1, translating into 3.0 million viewers — 50 percent above PBS’ primetime average for the 2011-12 season. The new season will lead into MASTERPIECE’s highly anticipated “Mr. Selfridge,” solidifying Sunday nights as a destination for quality drama on PBS.

Matt Forde, Executive Vice President, Sales and Co-Productions, BBC Worldwide Americas said: “CALL THE MIDWIFE has now proven itself a hit show on both sides of the Atlantic, attracting record audiences in the UK and taking huge rating strides in the U.S. in its first season. The show is a great complement to PBS’ popular line-up of powerful dramas and we are certain the show’s second season will continue to captivate and inspire.”

“We were so pleased with the overwhelming response we received to CALL THE MIDWIFE that we, along with our fans, can’t wait until the second season premiere,” said John F. Wilson, Senior Vice President & Chief TV Programming Executive.  “It’s exactly the kind of inventive, quality programming people expect from PBS, and it has helped us strengthen our Sunday night programming block into a true destination for drama fans.”

While fans eagerly await the March 31st premiere, they will have a special episode of CALL THE MIDWIFE to tide them over. CALL THE MIDWIFE HOLIDAY SPECIAL airs Sunday, December 30, 2012, 7:30-9:00 p.m. ET on PBS. Christmas is coming, and in Poplar, the nuns and midwives of Nonnatus House are busier than ever. When an abandoned baby is discovered on the steps of the convent, the whole community rallies round to provide food and clothing and to try and trace his mother. Nurse Jenny Lee, meanwhile, gets caught up in the heart-breaking mystery surrounding an elderly, semi-vagrant local woman, Mrs. Jenkins. And for newly married Chummy, other challenges await, as she pulls out all the stops to mount a truly memorable children’s nativity play.

Written by Heidi Thomas (“Cranford,” “Upstairs Downstairs”) and directed by Philippa Lowthorpe (“Five Daughters”) and Jamie Payne (“The Hour”), CALL THE MIDWIFE completed its first season in the U.S. in early November. In its UK debut, the series attracted 11.4 million viewers for its peak episode, making it the highest-rated BBC new drama launch on record. Audiences and critics in the U.S. were equally effusive, with the Washington Post declaring it “absorbing and inspiring” and the Los Angeles Times saying it is “lovely and engaging.” TV Guide simply proclaimed it a “keeper.”

CALL THE MIDWIFE, based on the best-selling memoirs of the late Jennifer Worth, is a highlight of PBS’ spring season. Extended to eight episodes, BBC One’s most successful new drama since ratings began sees the return of all its well-loved characters, as well as some new faces. Nonnatus House opens its doors to warmly welcome the audience back into 1950s East End London and continues to follow Poplar’s community of exceptional midwives and nursing nuns. The new season stays true to its roots — viewers can expect to see more births, babies and bicycling, plus blossoming romance from an unexpected quarter.

“PBS has been the perfect home for our show,” said executive producer Pippa Harris, “and we are all thrilled that American audiences have embraced the midwives and nuns of London’s East End so warmly. It’s a testament to the enduring appeal of Jennifer Worth’s books, the skill of screen writer Heidi Thomas and the huge talent of our cast and crew. The show is a celebration of birth, community and care for the most vulnerable in society, and we all look forward to delivering another season of moving and uplifting episodes next year.”

CALL THE MIDWIFE is a Neal Street production for BBC, executive produced by Pippa Harris (Revolutionary Road, “The Hollow Crown”) and Heidi Thomas. The series is produced by Hugh Warren (“Survivors”).

Full episodes of CALL THE MIDWIFE will be available for viewing on the PBS Video Portal for 30 days after each national broadcast.

About Neal Street Productions  Neal Street Productions was formed in 2003 by Sam Mendes, Pippa Harris and Caro Newling. The company has been successful in film, theatre and television with hit movies including Revolutionary Road, Jarhead and Starter for Ten. Their upcoming contemporary British thriller, Blood, starring Paul Bettany and Mark Strong, will be released in March 2013. Their diverse television slate includes the award-winning “Stuart A Life Backwards,” with Tom Hardy and Benedict Cumberbatch, and the hugely successful CALL THE MIDWIFE, which proved to be a ratings smash hit in the UK. This summer, they produced the critically acclaimed “The Hollow Crown” — a series of Shakespeare films for the BBC/PBS — starring Ben Whishaw, Tom Hiddleston and Jeremy Irons. A Christmas special and a second series of CALL THE MIDWIFE are in production, and a new series, “The Flavia de Luce Mysteries,” based on the books by Alan Bradley, is being developed for the BBC. On the theatre side, they have produced The Bridge Project, Shrek the Musical, South Downs & The Browning Version, Enron, Three Days of Rain and are currently working on a new West End musical of Charlie and the Chocolate Factory, directed by Sam Mendes, which will make its world premiere in June 2013.