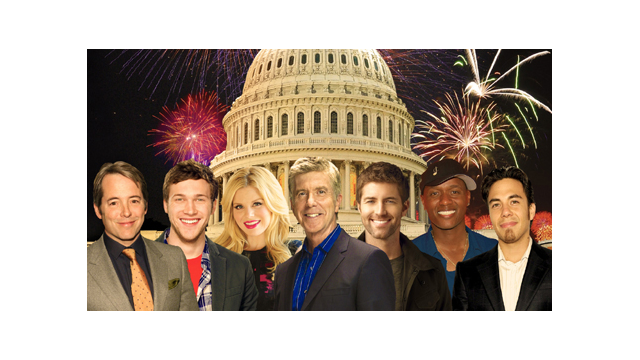 “As the nation’s birthday celebration, PBS is honored to present A CAPITOL FOURTH each year from the West Lawn of the U.S. Capitol,” said PBS senior vice president & chief TV programming executive John F. Wilson. “From Broadway performers to Olympic athletes, some of today's brightest stars joined with viewers across the country in a stellar tribute to a beloved holiday.”

“Dancing with the Stars” host Tom Bergeron led the nation’s 236th birthday celebration, live from the West Lawn of the U.S. Capitol. Some of America’s newly minted favorite performers and household names came together for a night of music and the country’s most spectacular display of fireworks. In honor of the London Games, a group of American Olympians joined eight-time medalist Apolo Anton Ohno for a heartfelt sendoff.

“It was a joy to bring together athletes from across the nation before they journey to the London Olympics,” said executive producer Jerry Colbert. “The Capitol is a spectacular place to celebrate their current and future achievements, made all the brighter by the dazzling performances and fireworks.”

About Capital Concerts Capital Concerts is the production force behind two of television’s longest-running and highest-rated live programs commemorating America’s most important holidays. The NATIONAL MEMORIAL DAY CONCERT, the nation’s tribute to our men and women in uniform, and A CAPITOL FOURTH, our country’s biggest birthday party, have become American traditions that have consistently ranked among the highest rated programs on PBS over the past decade. Both holiday specials have been honored with over 70 awards including the New York Film Festival Award, the Telly Award, the Golden Cine Award, the Videographer Award, the National Education Association Award, the Aurora Award, the Christopher Award, the Communicator’s Award, the AXIEM Award, the Omni Award and the Writer’s Guild of America Award.