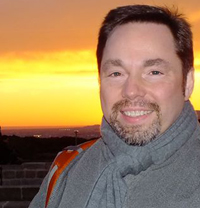 In the Q&A below, get to know more about PBS'er Kevin Ruppenthal. As Director of Technology Communications & Engagement, Kevin focuses on communications from PBS Technology & Operations out to the member stations as well as “other duties as assigned.”

Q. When did you join PBS, and what led you to want to work here?

November 1999. I’d been a fan of PBS since childhood, and I wanted to work somewhere as part of a team that had a mission I could believe in.

Q. You’re busy preparing for the PBS Technology Conference, which takes place each year during beginning of April. Broadly, can you share what TechCon is like each year, as well as give us a quick preview of what to expect at this year’s TechCon?

TechCon is an annual gathering aimed at the Engineering, Traffic, GM, and IT professionals across the system. It consists of two and a half days of sessions – more than 60 sessions, and 90+ speakers this year. In terms of intensity, it’s been likened to “trying to drink from a firehose.”

For 2014, the big topics include PBS plans for V6, which is the next iteration of our interconnection system. It will combine our current satellite distribution with delivery of streams and/or files over terrestrial IP Networks. Related to that we have several sessions on Cloud & IP video technology, all of which is impacting how our member stations envision their next version of Master Control.

There will be updates on other PBS initiatives too, from Digital and Distribution to the WARN team and NRT. Industry issues such as the upcoming Spectrum Auction will be on the agenda, too. There will also be many opportunities for stations to get answers to their questions from their colleagues – we build that sort of networking right into the schedule. For more info, visit www.pbstechconference.org.

Q. You were heavily involved in last fall’s Public Broadcasters International (PBI) conference, which PBS hosted in D.C. How did planning and implementation for that event differ from other events you’ve worked on?

PBI was an “other conferences as assigned” situation. The audience for PBI is chief executives from public broadcasters around the entire world. Organizations in attendance range from as large and established as the BBC, to those as small and new as the broadcasters from Maldives. Programming the agenda for a conference I’d never been to before was really challenging. Recruiting speakers and deciding on topics was done mostly via e-mail along with the help of Google Translate.

We worried our unfamiliarity with the other public broadcasters would be a hindrance, and we were able to overcome it. Our project manager, Traci Richards, did a masterful job of keeping all the teams on track. What really made the difference was the entire PBS Conference Services team. Their work on all the venue and tech aspects of the event freed us up to focus on the agenda. Some of the attendees told us that not only was it the best PBI conference they’d been to, but that it was the best conference they’d ever been to, period.

Q. In your nearly 15 years here, you’ve had a front row seat to a lot of change within PBS, as well as the industry as a whole. What’s the biggest change you have seen?

When I first started at PBS it was puzzling as to why everything we put on the air was not available for home viewing. Now, though, we’re pretty much there – especially with online video. The sheer amount of programming audiences are able to access on demand is astonishing. The way we consume video is moving incredibly fast compared to even just five years ago. Technology always has another transition on the horizon, and these days it feels like we’re crossing some new boundary on a weekly basis.

Q. Where did you go to school? What’s your degree in and what drew you to your major? Even though you don’t have the traditional technical background, what led you to a career in technology?

The University of Pittsburgh, aka “Pitt.” My degree is in Film Studies and English Literature, though I spent three terms in Electrical Engineering before realizing it was not a good fit. I may be one of the few liberal arts majors in Technology & Operations. My education and general interest has given me background to understand the technology to be able to communicate about it - even if I’m not allowed to run any gear!

Q. Where did you grow up?

Outside Scranton, PA, home of The Office. I miss my family there, and I like that when I do drive home, Rock 107 is still playing the same exact music they were in the 1980s.

Q. And finally, finish this sentence: PBS is special because...

...of its important educational mission.

Learn more about working at PBS and see a list of current openings.