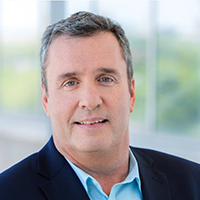 Dunford joined PBS in 2016 as Vice President, Programming and Operations, where he was responsible for the leadership of PBS content services and operations in support of PBS’s award-winning programming. In addition, Dunford supported content strategy, planning and analysis, and he managed several high-profile projects, including the station-focused engagement campaign for “The Great American Read.”

Dunford came to PBS from member station WGBH in Boston. As Managing Director for AMERICAN EXPERIENCE, television’s most-watched history series, he led strategic planning for content distribution and presentation, audience development, promotion, communications, post production and digital production. Prior to assuming that role, Dunford served as Director of Board Relations and Development Operations, managing all activities of the WGBH Board of Trustees. Previously, he spent 12 years as Series Manager and Post Production Manager for AMERICAN EXPERIENCE.

Dunford is a graduate of Boston College, where he also served as a member of the adjunct faculty. In that role, he oversaw course design and delivery of communications-related courses in the College of Arts and Sciences, including Broadcast Writing and Broadcast Programming. He is a member of the National Academy of Television Arts and Sciences, and his work has earned awards from Promax and the Webbys.