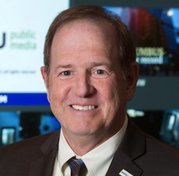 WOSU has won over a dozen regional Emmy awards for local programming in the past three years.  WOSU 89.7 NPR News has been named the best radio news operation in Ohio by the Society of Professional Journalists and AP Ohio.

WOSU Classroom reaches over 8,000 young children every year through its Ready to Learn programming and serves teachers in the through technology training in the classroom and PBS Learning Media.
Rieland is directing the building of a new $35 million headquarters and studio complex near the entrance to the Ohio State campus.   The facility will open in the spring of 2021 with a community engagement studio, makers media lab, expanded newsroom, and other assets to serve campus and community.

Rieland led the Center for Public Television & Radio at the University of Alabama for twelve years before coming to Columbus. He has a news and documentary production background, having received regional Emmy and Film Festival awards for documentary programming.

He is a past Chair of the National Educational Telecommunications Association (NETA), the Affinity Group Coalition, and Joint Licensees Association and serves on the board of the Public Media Venture Group.

On the PBS Board, Rieland serves as Chair of the PBS Station Services Committee and the Member Services Access Working Group and serves on the Executive and Interconnection committees and Working Group on Unserved Areas.