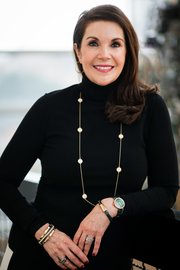 Her business strengths are knowledge of efficiencies surrounding mergers and effective change management methodology, execution and actionable metrics. Prior to joining the University, she held successive roles of executive leadership at KHOU-TV (TEGNA), BELO Corporation (TEGNA) and KTRK-TV (Disney/ABC) in both Houston and Dallas.

Appointed to the national PBS Board of Directors in 2015, she currently serves as Vice Chair. She is also a member of the PBS Foundation Board and serves on its Endowment Fund Committee. In addition, she is a member of the Executive Women's Partnership affiliate of the Greater Houston Partnership, and is the Chair of the Public Television Major Market Group Board of Directors.

Honored with the 2018 Award for Public Service by the Houston Hispanic Chamber of Commerce, she is a long-time ambassador and community advocate and has been honored as the recipient of national and regional awards for community service, including a recipient of the Media Alliance of Houston Star Award TV Market Manager (2017-2019), America’s Public Television Stations Pillar of Broadcasting Award (2017), Secured Cities Innovation Award (2015), American Marketing Association’s Crystal Award (2014, 2016), Lone Star Regional Emmy (2010), Leadership Houston Community Award (2009), Lone Star Emmy Public Affairs (2002) and the American Women in Radio and Television Gracie Award (1998).

Ms. Shumate is Vice Chair of the PBS Finance Committee and serves on the Executive, and Nominating and Corporate Governance committees and on the Strategic Planning Advisory Group. She is also a member of the PBS Foundation Board and serves on its Endowment Fund Committee.