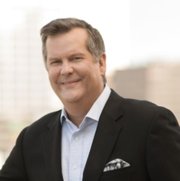 Kliff Kuehl graduated with honors from the University of Texas. He worked as an award winning film and video producer before becoming production supervisor and operations manager and then president and general manager of KWBU-TV and KWBU-FM.

From 2004 through 2009, Kuehl served as the President and CEO of KNPB-TV, public television for northern Nevada. In that time, he helped the KNPB team wrap up a $6.25 million capital campaign, assisted in tripling the number of major donors, and helped to secure an almost $1 million in-kind donation.
Kuehl joined KCPT in 2009. He is working to transform public media into a better and more sustainable service. In an era of declining local coverage by newspapers and commercial television, he wants KCPT to bridge the gap by growing its local content services.
In 2013, KCPT launched The Hale Center for Journalism. This multimedia center for journalism distributes local content through a variety of  “channels,” including public television, social media, and KCPT’s digital magazine flatlandkc.org. The goal is to cover the issues and stories of the Kansas City region in a comprehensive, in-depth and innovative way. The Hale Center was the result of an effort between Kuehl and the PBS Foundation to secure $3M for local news content creation, and $1M for the PBS Foundation.
In December of that same year, KCPT acquired KTBG 90.9 FM (The Bridge). Kuehl’s aim for this NPR Music Discovery radio station is to inspire listeners to become more involved in the community and create life long bonds with public media.
Through improvements and growth in fundraising along with digital, social, and local storytelling, Kuehl is committed to re-inventing and reinvigorating Kansas City PBS.
Kuehl stays engaged at the national level with his membership on several boards – the PBS and APTS national boards, as well as the Vuhaus and NETA boards.
Mr. Kuehl is Chair of the Corporate Support Advisory Committee and serves on the Station Services and PBS National Policy Advisory committees and on the Working Group on Unserved Areas and the Strategic Planning Advisory Group.