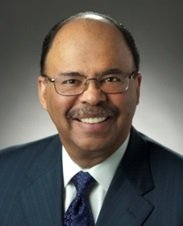 Erroll B. Davis, Jr. is a retired senior executive presently engaged with board, philanthropic, senior executive counseling and consulting work.  He most recently served as superintendent of Atlanta Public Schools from July 2011 until his retirement in July 2014.  Prior to Atlanta Public Schools, Mr. Davis served as Chancellor of the University System of Georgia from February 2006 to June 2011, President, Chief Executive Officer and Chair of the board of Alliant Energy Corporation, an energy holding company, from 1998 to 2006, and President and Chief Executive Officer of WPL Holdings, which merged with two other companies to form Alliant Energy, from 1990 to 1998.  Mr. Davis also previously served as President, Chief Executive Officer, and Vice President of Finance of Wisconsin Power and Light Company from 1978 to 1990.

Mr. Davis holds a B.S. in Electrical Engineering from Carnegie Mellon University and an M.B.A. in Finance from the University of Chicago.

In addition to chairing the PBS Investment Committee, he also serves on the PBS Audit and  National Policy Advisory committees.