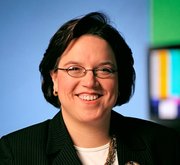 President and CEO of WQED Multimedia

Ms. Acklin has served in multiple executive roles in public broadcasting, the cable television industry, and commercial broadcasting.  At WQED, she manages or has managed the operations, strategies, and fundraising to create original multi-platform content distributed across five television channels, three radio channels, an interactive web-based global media distribution portal, an education department, and PBS, NPR and their member stations.

Her tenure includes many achievements, including an unprecedented four Mid-Atlantic Emmy Awards for Overall Excellence, given by the regional chapter of the National Academy of Television Arts and Sciences to a general manager of a commercial or public television station in Pennsylvania, Delaware, West Virginia and New Jersey.

In 2018, she oversaw WQED’s production of Tree of Life: A Concert for Peace and Unity, which aired locally and on PBS stations nationwide. The production featured the Pittsburgh Symphony Orchestra’s concert of remembrance and reverence in the wake of the tragedy at the synagogue in nearby Squirrel Hill. The concert brought the Pittsburgh community together to find comfort, strength and solace through music, hope and unity.

Ms. Acklin is active in the community on a variety of board and advisory boards, both locally and nationally, including the PBS Board of Directors. She holds a B.A. from Duquesne University and is a graduate of Harvard Business School.