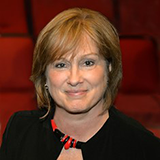 Since joining Arkansas PBS, Courtney has led the network in multi-faceted strategic planning with a focus on digital storytelling and distribution, universal elements in stories for broader appeal, refreshed local broadcast, increased education efforts, fundraising strategies and community connection. She has worked with urgency to build Arkansas PBS’s relevance statewide with the online network AR-CAN (Arkansas Citizen’s Access Network), building civic literacy and providing transparency in state government. Arkansas PBS’s efforts in K-12 teacher professional development have doubled in reach over the past several years and the network has launched essential courses addressing literacy, teen suicide and child maltreatment as well as multiple digital series promoting literacy in a state where over 60% of 3rd graders are not proficient readers. Arkansas PBS Sports celebrates student athletes in their championship performances while also telling the athletes personal stories on digital and broadcast.

From 2012-2016, Courtney served as executive director of Hot Springs Documentary Film Festival, where she reimagined the longest-running nonfiction festival in North America, gaining the designation as an Oscar-qualifier in Documentary Short Subject and building a donor base to sustain the festival into the future.

Courtney began her career at Hearst Entertainment, Rastar and the IndieProd Company and has held senior leadership roles at multiple film and television organizations including Universal’s Illumination Entertainment where she focused on IP for family-friendly films, London-based Jigsaw Films/Miramax, Radical Pictures and the U.K.’s Aardman Animation where she served as a creative consultant. She has been the recipient of Women in Film's Lillian Gish Producing Award and is currently on the advisory board for the newly-established Arkansas Women in Film.

Courtney is a member of the NETA Executive Committee and is the co-chair of the Organization of State Broadcast Executives. She served on the most recent Corporation for Public Broadcasting CSG Review Panel, is active in the new CPB Rural Content Initiative and participates in multiple working groups for CPB and NETA.

Born an Arkansan, Courtney grew up in Jackson, Mississippi where she attended Millsaps College. She is the mother of three grown children - Miranda, Liam and India.