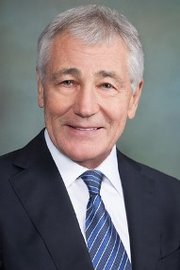 Some of Hagel’s current commitments include service on the Board of Trustees of RAND; Advisory Board of Corsair Capital; Senior Advisor to GALLUP and to the McCarthy Group; Centennial Scholar, Georgetown Walsh School of Foreign Service; Distinguished Scholar, University of Nebraska at Omaha; Distinguished Statesman at the Atlantic Council; Board of Directors of Public Broadcasting Service (PBS); Director and Founding Member of the American Security Project; and Advisory Board Chairman of the HillVets Veterans Organization.

Hagel served two terms in the United States Senate (1997-2009) representing the state of Nebraska. Hagel was a senior member of the Senate Foreign Relations; Banking, Housing and Urban Affairs; and Intelligence Committees. He Chaired the Foreign Relations International Economic Policy, Export and Trade Promotion Subcommittee; and the Banking Committee’s International Trade and Finance, and Securities Subcommittees. Hagel also served as the Chairman of the Congressional-Executive Commission on China and the Senate Climate Change Observer Group.

Previously, Secretary Hagel was a Distinguished Professor at Georgetown University, Co- Chairman of the President’s Intelligence Advisory Board, Chairman of the Atlantic Council. He served as a member of the Secretary of Defense’s Policy Board, Secretary of Energy’s Blue Ribbon Commission on the Future of Nuclear Power, Systemic Risk Council Board of Directors; and as a member of the Board of Directors of Chevron.

Prior to his election to the U.S. Senate, Hagel was president of McCarthy & Company, an investment banking firm in Omaha, Nebraska. In the mid-1980’s, Hagel co-founded VANGUARD Cellular Systems, Inc., a publicly traded corporation. He was President and CEO of the World USO, Private Sector Council (PSC), and Chief Operating Officer of the 1990 Economic Summit of Industrialized Nations (G-7 Summit). Hagel also served as Deputy Administrator of the Veterans Administration under President Ronald Reagan and Deputy Commissioner General of the 1982 World’s Fair.

He is the author of the book, America: Our Next Chapter and was the subject of a 2018 book by General Daniel Bolger entitled, Our Year of War, and a 2006 book by Charlyne Berens entitled, Chuck Hagel: Moving Forward. He is a graduate of the University of Nebraska at Omaha. Hagel and his wife, Lilibet, have a daughter (Allyn) and son (Ziller).

Secretary Hagel is Co-Chair of the PBS National Policy Advisory Committee and serves on the Nominating and Corporate Governance Committee.